There is no glass ceiling, says Fae Ellington 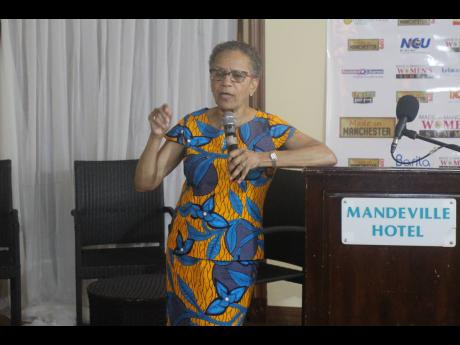 There are many women who live with limiting beliefs because of the paradigms they have chosen to give power to.

But what if that shifted and the role of every single woman were seen as being crucial?

Media and communication consultant Fae Ellington said that she has never lived her life thinking there was a glass ceiling above her and that her abilities were never affected by her gender.

“I grew up in a little board house in Clarendon [and] when it rained, [whether you got wet or not] was dependent on what room you were in, how large the leakage was, whether you will need a chimmie, bath pan or a pail ... Outside toilet with cockroach and outside kitchen – I was used to all that,” she revealed.

She said that from very early, her family set the foundation for her growth and success and influenced her creativity through their own prowess in the performing arts, oftentimes without even knowing.

“I found this outlet in the creative arts, and it was there that I met the greats. Theatre taught me punctuality, discipline, respect for others, teamwork, research and learning to accept critique in front of others. In life, talent is not enough; you need to subject yourself to coaching. People like Usain Bolt, I think, have honed his special talent, but if he did not subject himself to guidance and training, [he might not have been as successful]. You have to be able to accept criticism,” she stated.

The veteran broadcaster, who was speaking at the Made in Manchester Women’s Summit recently, said her success rested heavily on how hard she was willing to work and stand up for what she wanted.

“Nobody is perfect, but you have to keep raising the standard for excellence. You have to keep sharpening the saw. How I was five years ago is not the same as I was 30-plus years ago. I have never believed there was a glass ceiling over my head. Anything I don’t have is what I didn’t want to accomplish,” she stated.

She continued, “When you do your work, people will see. And the funny thing is, men kept promoting me. Sexual favours don’t have to come into play, just be a professional. In 1978, I was the first woman to host a show for early-morning radio; I was also made chief announcer. If you do your work, the blessings will come.”

Ellington worked at an insurance company while hosting ‘Morning Time’ and anchoring news for six years because she had a drive, and was not going to allow people to write her narrative.

“When you look at someone, you see a portion of their story. The public persona you see is never all that there is,” she said.

Ellington did not allow talks of the texture of her hair, her gender or other faults people had with her to compromise her integrity.

Referencing the receipt of a posture badge at St Hugh’s High School, Ellington said that everything in life makes you who you are.

“They thought I learnt it, but it was from all those years of carrying load on my head. Everything connects. The things you complain about now may benefit you later, and don’t allow your fears to rule your life, just strategise,” she advised the gathering.