12-y-o homeless for the summer? - State yet to find holiday accommodation for visually impaired ward 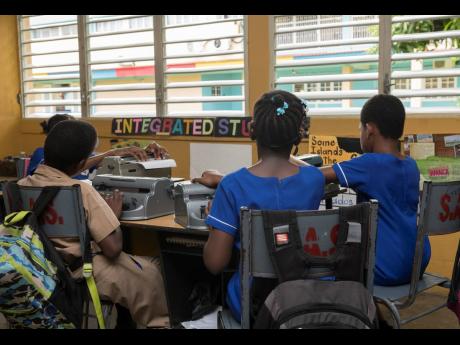 Twelve-year-old Salvation Army School for the Blind and Visually Impaired student Samantha Jakes* will have nowhere to live this summer if the Child Protection and Family Services Agency (CPFSA) does not find somewhere for her.

Her school’s guidance counsellor said that officials at the agency were notified of the child’s impending predicament as early as February of this year, and he, too, has been searching for a children’s home which caters to those with disabilities, but most are private facilities and are at capacity.

Although the school offers boarding for students like Samantha, the facility will be closed during the summer break, and so without intervention, Samantha, a ward of the state, will essentially be homeless.

“We have had no communication to say where this child is going,” said the guidance counsellor, who does not wish for his name to be printed.

“On a daily basis, she comes to me, asking where she is going to go for the summer,” he said.

Samantha’s mother died more than five years ago and the court deemed her father incapable of caring for her so she became a ward of the state.

Samantha was placed at a private children’s home that caters to girls who are 14 years old and older by the CPFSA and was removed after she “suffered a lot of mistreatment of all sorts – medical, physical, and verbal”, according to the guidance counsellor.

Samantha went to the home last July and did not return after December because of the abuse. A pledge was made to find her a home to stay when she was not boarding at the Salvation Army School for the Blind, and in the interim, the school made temporary arrangements with the parent of another student to keep her during the Easter holidays. The hope was that the CPFSA would have found somewhere for her to say during upcoming holidays.

“At the moment, ... they (CPFSA) are saying that they don’t have any placement,” the guidance counsellor said.

He said that letters were sent to both the CPFSA and Children’s Advocate Diahann Gordon Harrison documenting the abuse meted out to the child during her stay at the children’s home. Gordon Harrison confirmed to The Sunday Gleaner that her office is investigating the matter.

“We have collected statements and certain bits of documentary evidence already,” she said.

While she could not share details about the nature of the abuse the child experienced, Gordon Harrison said that she has been receiving updates from her team.

The guidance counsellor, a trained social worker since 2008, lamented that the Government was heavily reliant on private homes to provide shelter for wards with disabilities.

“The State has to have something in place because if every children’s home in this country decides that they are not going to take this child with a disability, then what?” he asked.

CPFSA Public Relations and Communications Manager Rochelle Dixon said that there are homes available for children with disabilities, although most are privately operated by the Mustard Seed Communities. She acknowledged that the Mustard Seed homes were full, but said that there were two other homes for these children in Westmoreland and Portland. The latter only accept boys, she said.

While the National Children’s Home in Kingston takes in children generally, it also has a section reserved for special-needs children, and Dixon said that the staff are trained to adequately care for them.

There are more than 33,000 children under the age of 14 living with disabilities in Jamaica. Child Month, which was observed in May under the theme ‘Encourage, Enable, Include Me’, also placed focus on children with special needs.