8 get scholarships to study medicine in Cuba 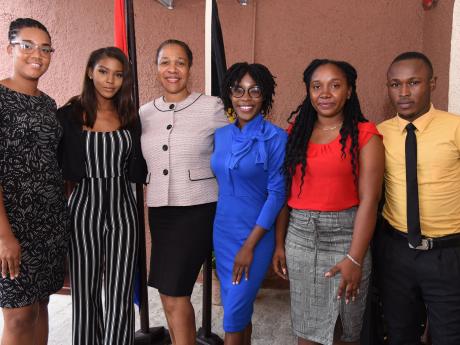 (JIS): Seven Jamaican students were awarded scholarships under under the Jamaica/Cuba Bilateral Medical Scholarship Programme to study medicine in the neighbouring island, beginning in September.

Another student, Marianne Binta Konate Hernandez, a Jamaican resident of Cuban heritage, was also awarded a scholarship to study medicine in the neighbouring island.

Each year, the government of Cuba awards scholarships to Cuban descendants living abroad.

The awards were formally presented to the students during a ceremony at the Embassy of the Republic of Cuba in Kingston on Friday.

Under-Secretary in the Multilateral Affairs Division of the Ministry of Foreign Affairs and Foreign Trade, Ambassador Ann Scott, who spoke at the function, thanked the government of Cuba for the tremendous effort over the years to support and sustain the programme.

“The government of Cuba has remained steadfast in its commitment to providing these well-needed scholarships for which we are deeply grateful,” she said.

Scott noted that the provisions are consistent with the country’s strategic long-term National Development Plan - Vision 2030 Jamaica, and Government’s resolve “to build human capital so as to increase social development, particularly in rural communities across the island”.

“Undoubtedly, health and wellness are two critical objectives if we are to successfully attain the Sustainable Development Goals that constitute the globally agreed [United Nations] Agenda 2030. Cuba’s support, in this regard, is deeply valued,” she added.

Scott pointed out that the scholarship programme is one of several mutually beneficial initiatives on cooperation that exist between Jamaica and Cuba, adding that it reflects the strong diplomatic and fraternal ties both countries have shared since 1972.

In her remarks, Cuba’s Ambassador to Jamaica Ines Fors Fernandez, said her country’s government has been able to continue on its path for social achievement despite “complex external challenges”.

She said Cuba’s medical achievements include: training more than 10,800 family doctors and nurses; and establishing 450 neighbourhood polyclinics, 150 hospitals, 12 research institutions, 287 community centres for older citizens, and 13 universities of medical sciences, among other institutions.

The Cuban top diplomat said that the motto of the medical school, which the 2019 scholars will attend, highlights the focus on providing free medical training to bright students who are passionate about becoming doctors, but lack the financial resources to do so.

She said provision of the scholarships “will drive them to return to serve in communities like their own”.