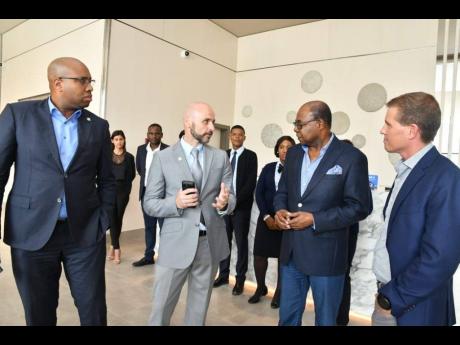 Although Kingston is officially listed by the Jamaica Tourist Board (JTB) as one of the island’s six resort areas, the city has not always enjoyed first-call status as it relates to tourist arrivals. This, however, seems to be rapidly changing as the nation’s capital has been gaining traction as a cultural and musical destination and is now being given a second look by travellers, mainly the millennials.

Investors have been taking note of the upward tick in visitor arrivals and are seeking to exploit this positive development.

Tourism Minister Edmund Bartlett says he is not surprised by the renewed interest in Kingston, noting that “this can only further add value to what is an already very attractive tourism product”.

He said that the development of the AC Marriott Kingston Hotel and the R Hotel is not only a major boost for the city’s tourism offerings, but would assist in showcasing the metropolis as a viable alternative to the island’s northern and southern coasts.

“Jamaica’s tourism product is getting more diverse by the day. Our arrival figures are now at a stratospheric level where, for the first time in history, we welcomed some two million visitors in the first five months of the year and earned US$1.7 billion in revenue,” he notes.

Bartlett adds that he expects the boutique R Hotel in New Kingston and also the AC Marriott to not only increase Kingston’s rooms, but to also play a part in attracting more visitors to Jamaica.

“The presence of products like these adds to the statement that Kingston wants to make … that it has arrived and is ready for the status of a big-city tourism destination. So we are also excited about building out these very important elements of what true city tourism is about,” he further says.

The hotel represents the family’s first major tourism venture outside of its Sandals/Beaches resorts brand.

“The AC Marriott in Kingston is very special. It is not just a facility that enables people to walk in, sleep at night, or have a drink. It is a place for recreation, rest, and conversation. But more importantly, it is also a creative centre where people will get a chance to enjoy the culture while making a contribution to local development,” Bartlett argues.

Additionally, the minister says that he is equally impressed with what the R Hotel brings to the table, noting that it represents the new drive in Jamaica to not only increase numbers, but to also add value to the experiences of visitors to the island.

He praises the owners for outfitting the hotel with Jamaica-made furnishings and promoting local culture and food through the establishment’s Gene Pearson Gallery and Redbones Blues Café.

“This is an exciting part of this retention strategy that we have because when the supplies that the tourist consumes are bought and produced in Jamaica, then the dollar remains here. This has resulted in an increase in retention from 30 per cent to 40.8 per cent,” the minister points out.

For his part, R Hotel Director Joe Bogdanovich says that with the establishment’s opening come new possibilities for the expansion of Brand Jamaica through business tourism in the capital.

“Kingston has enormous potential for both business and conventional tourism, and we in the industry must continue to innovate in order to make Kingston the premier city to conduct business in the Caribbean,” he points out.

Senior Adviser-Strategist in the Ministry of Tourism Delano Seiveright notes that “the development comes on the heels of other major tourism developments in Kingston, including the … 220-room AC Marriott Kingston Hotel and the 2020 opening announcement of the new 168-room Tapestry Collection by Hilton hotel on PanJam Investment Limited’s multipurpose complex on the downtown Kingston waterfront”.