UTech nursing students to get training in China 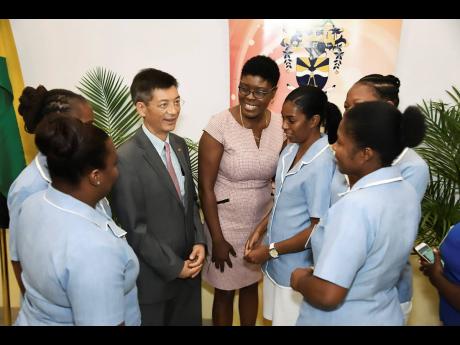 Eighteen nursing students and three members of the academic staff from the University of Technology (UTech) will depart this month for Beijing, China, to participate in a special Critical Care Nurses Training Programme at the invitation of the Government of China.

Last week, UTech, through its Caribbean School of Nursing (CSON), held a special reception for the nurses.

Fan Jianghong, commercial and economic counsellor, Chinese Embassy in Jamaica, who represented His Excellency Tian Qi, Chinese ambassador to Jamaica, described the collaboration for the training of critical-care nursing students in China as a “win-win” for both countries. He noted that the China-sponsored programme would “enhance cooperation in public health between both countries”.

Among those commending the students and thanking the Government of China at the function were UTech, Jamaica President, Professor Stephen Vasciannie; dean of the College of Health Sciences, Dr Janet Campbell-Shelly; head of the Caribbean School of Nursing, Dr Adella Campbell, among other senior staff.