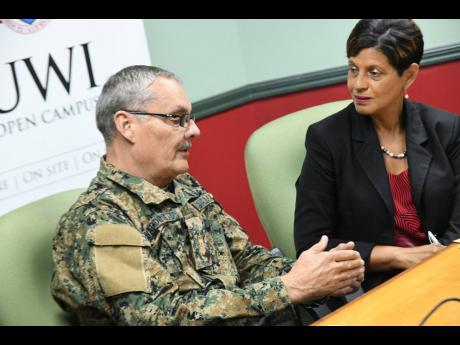 Rudolph Brown
Dr Luz Longsworth, pro-vice chancellor and principal of The University of the West Indies Open Campus, speaks with Lieutenant Colonel Blair Waddington of the Jamaica Defence Force, during a press conference to launch a cyber security workshop last week at The UWI Open Campus Learning Centre at the UWI, Mona campus in St Andrew.

The University of the West Indies (UWI) Open Campus and the Jamaica Defence Force (JDF) have partnered to boost basic cybercrime investigative knowledge and raise awareness about the increase in cybersecurity breaches globally and their impact on the region.

The workshop entitled ‘Cybersecurity: Pathways to Managing Cyber Vulnerabilities’, will take place on July 24 and 25 at the JDF Directorate of Training and Doctrine at Up Park Camp in Kingston.

During a press briefing at the UWI Open Campus Learning Centre, Dr Luz Longsworth, pro-vice-chancellor and principal, said cybersecurity breaches are becoming a major risk to the Caribbean’s survival.

“One of the things we want to see coming out of the discussion is how we, as a region, we can work together, given our limited resources, to ensure, as we do with hurricanes and volcanoes and earthquakes, that we have an agency that is monitoring, collecting data, doing the research, and ensuring that we are on [the] cutting edge and also collaborating with colleagues internationally,” Longsworth told journalists.

Retish Kotak, former police officer in the Toronto Police Service, who joined the press conference by video link, although cautioning against a reliance on general statistics, said that there has been an increase in cybercrime.

Michael Levin, former branch chief of the United States Secret Services who also joined by video link, said that in the US, they are seeing increasing cases of cybercrime.

“Yes, we are definitely seeing [an] increase, especially ransomware, so in looking on the internet, I have seen statistics last year, that it has been about U$S8 billion [that] was paid in ransom ware last year, and this year it will probably be double in 2019. We are seeing a lot more cities paying this money. In the US, many cities have insurance and many private-sector organisations have insurance and insurance, companies are paying the money, and then, obviously rates are gonna go up for everybody,” Levin said.

The workshop will be facilitated by a combination of other international experts and Jamaican cybersecurity professionals and specialists.