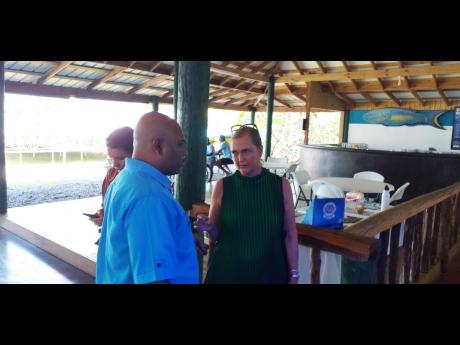 The Alligator Head Foundation, that has successfully established a fish sanctuary in east Portland, is reaping huge success in its quest to restore marine life.

Founded six years ago by Franscesca Thyssen-Bornemisza, the foundation has been integrally involved in communities across east Portland while creating job opportunities for some residents.

Speaking at the foundation’s open-day event last Friday, Thyssen-Bornemisza pointed out that it has been difficult to achieve success at the fish sanctuary as it is challenging for some fisherfolk to adapt to the necessary changes.

“It has been rather difficult getting to where we are today,” she said.

“It is a huge landmark for us. It has been three years here and six years overall,” Thyssen-Bornemisza added.

“Six years ago, it struck us that we could, with hard work and support, create a fish sanctuary that would allow for the restoration of the coral reef and various species of fish which were severely depleted. We had been on a somewhat similar expedition to Mexico in a community that had suffered for more than 30 years from overfishing.”

She noted that science had been an integral part of the success of the sanctuary, which is now reaping the desired results. She said that the varied species of fish including the grouper are now returning to the area, along with turtles, which have been laying eggs along the beach, in a protected area.

“Without the science none of this is possible. This has been six years of incredibly high level science that has gone into this project. The difference since the establishment of the sanctuary is tangible. There has been an increase of more than 200 per cent in the fish population. The University of the West Indies did the necessary studies on water quality, fish stock, the health of the reef, and the potential of what a sanctuary would do,” said Thyssen-Bornemisza.

And, according to several marine biologists, within the next five to ten years, there will be a different landscape and seascape.