Get cracking on laws to protect children – Malcolm 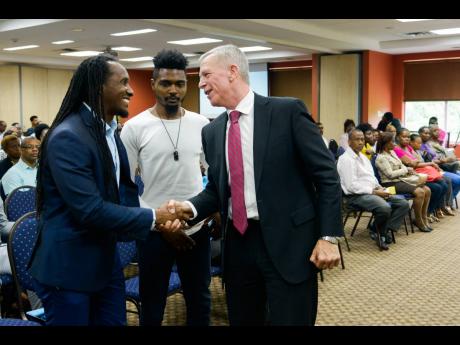 Shorn Hector
Alando Terrelonge (left), minister of state in the Ministry of Education, Youth and Information, in conversation with Walter Bernyck (right), counsellor and head of development cooperation at the Canadian High Commission; and Rodje Malcolm, executive director of Jamaicans for Justice, at a child protection seminar at The University of the West Indies Regional Headquarters last week.

The Government is being urged to expedite and enforce legislation that will give greater protection to the nation’s children.

Among them is the Disabilities Act, which was passed in 2014 and makes provisions to enhance the well-being of Jamaicans with disabilities.

Jamaicans for Justice Executive Director Rodje Malcolm, in his address at a child protection seminar on Thursday, said the status of the legislations put children at a disadvantage.

“We have the delayed enactment of the Disabilities Act. It’s now approaching year five of Jamaica passing a disabilities law, which impacts significantly children with disabilities, and that law is intentionally not being brought into force because, for some reason, the Government says they’re not ready,” said Malcolm.

The Statistical Institute of Jamaica reports that there were 5,000 children registered with the Jamaica Council for Persons with Disabilities in 2017.

“We are also awaiting a comprehensive reform of the Child Care and Protection Act, and though we have identified ad nauseam the amendments that need to [be done], until that occurs, it will remain unfinished business,” the human rights advocate added.

Malcolm also pointed to the Child Diversion Act, which allows children to be diverted from the formal justice system, and the Children (Adoption of) Act.

Further, Malcolm said the languishing of laws to protect vulnerable citizens in the legislature impacts the rights of children.

Under Jamaican law, “we only have partial coverage of all forms of internationally recognised forms of child neglect”, Malcolm said.

“Jamaicans for Justice is calling strongly for the business to be finished of amending our child protection architecture and implementing laws ... because we know what we need them to say. We’ve written them, we just haven’t put them into action. The unfinished business is not that hard to finish,” he charged.