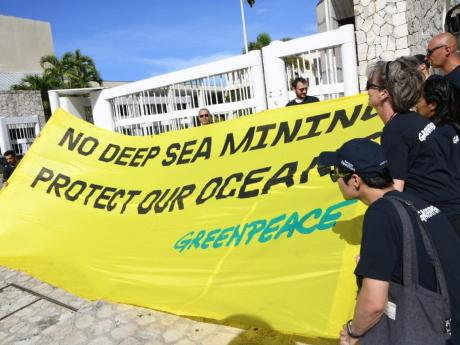 The authority is hosting its annual meeting at the Jamaica Conference Centre.

The protesters called for governments to agree on a Global Ocean Treaty that would protect oceans from industrial exploitation.

Among other things, the treaty calls for the creation of a global system that allows for the effective implemention of ocean sanctuaries on the high seas.

In a statement, a JET spokesperson says Greenpeace’s ship, the Esperanza, sailed to Jamaica directly from one of the most iconic battlegrounds for the nascent industry, the so-called Lost City in the mid-Atlantic, which it says is under threat after the authority granted an exploration contract in the region.

The environment lobby group says scientists have warned that deep sea mining could cause irreversible and inevitable harm to marine life, including extinctions of species, and drive the climate crisis by disrupting ‘blue carbon’ stores in the seabed.

“Although Jamaican waters are not a target for deep sea mining, the Government of Jamaica (GOJ) has agreed to sponsor Blue Minerals Jamaica Limited’s application for a deep sea mining exploration contract this year. JET expressed concern about the absence of information in the public domain and the implications of this agreement for Jamaica and our oceans,” the spokesperson said.

"In the absence of a national regulatory or monitoring framework for deep sea mining, combined with significant associated environmental and financial risks, a sponsorship agreement with a deep sea mining company does not reflect well on the GOJ's international commitments to transparency and sound environmental stewardship,” said Suzanne Stanley, JET CEO.

“The oceans are facing more threats now than at any time in history, but the dangerous deep sea mining industry wants to put yet more pressure on fragile ecosystems,” said Louisa Casson, of Greenpeace’s Protect the Oceans campaign.

“The International Seabed Authority is responsible for regulating deep sea mining, but instead of safeguarding the deep ocean this so-called regulator is serving the interests of industry and ‘selling off’ the seabed for mining exploration,” Casson added.