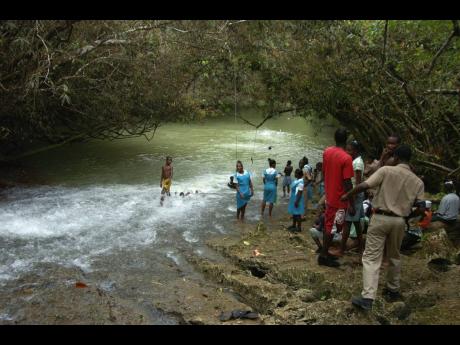 File Photo
Students enjoy the river at The Falls at Two Hills after the launch of the Cockpit Country local forest management committees in Bunkers Hill, Trelawny, on March 28, 2007.

Kenneth Grant, president of the Trelawny Lay Magistrates’ Association, has put himself into the ­forefront of the fight to prevent bauxite interests from conducting ­mining operations in the Cockpit Country, which spans several communities in ­southern Trelawny.

On Monday, residents of Albert Town and surrounding communities staged a demonstration to send a clear message that they remain opposed to any bauxite mining in the Cockpit Country.

Residents and stakeholders have been at loggerheads with the Government as they contend that sections of the Cockpit Country are outside the State’s designated protected area border and are projected for mining.

“I am totally against any form of bauxite mining in the Cockpit Country, and I am prepared to do whatever it takes, within the boundaries of the law, to try and prevent this,” said Grant, who, along with environmentalist Hugh Dixon, the president of the South Trelawny Environmental Agency, is leading the fight to keep out bauxite interests.

“We provide 40 per cent of the freshwater that Jamaica needs. How can we destroy this source?” asked Grant.

The Cockpit Country is the source of six major rivers and is a critical water resource for western Jamaica.

While the Government has declared that there will be no mining in the protected area, on Monday, scores of placard-bearing protesters questioned the ­sincerity of the statement, contending that those borders have left several communities in the area exposed to possible exploitation.

“The Government is not ­listening. They are hell-bent on destroying the Cockpit Country, but we will not allow it,” said a young man who described himself as a proud Maroon. “It is the blood of Tacky and Nanny that is running in our veins, so we are ready for a fight … . This is sacred lands, lands that our ancestors shed blood for.”

Earlier this year, the usually mild-mannered Grant showed much militancy when he declared that he was ready to die to protect the Cockpit Country.

“No mining is going to take place in the Cockpit Country. Even if it means losing my life, then so be it,” Grant told The Gleaner in June ahead of a meeting with Prime Minister Andrew Holness.

Holness, who subsequently ­visited the area, appears to be leaning on the boundaries identified by the Forestry Department, to which the residents have objected.

In addition to churning out much-needed water, the Cockpit Country produces 70 per cent of the nation’s yams for both the local and export markets. Yam farming represents the livelihood of ­hundreds of farmers.

The Cockpit Country is also the most biodiverse section of the island and is home to several plant and animal species found nowhere else in the world. It is the last ­refuge for some species driven from the rest of Jamaica by humans.