From cabin to coffee factory [Part III] … The Arthur A. McGowan story 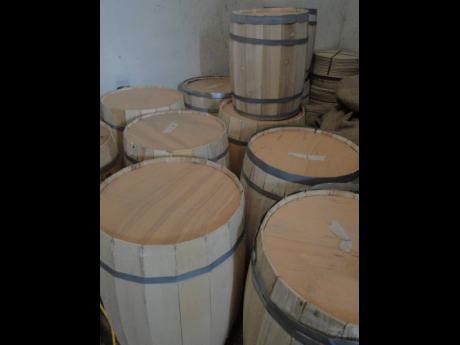 The end of 2014 saw Arthur A. McGowan, the steel-pan musician, evolving from the boy who lived with his father in a little board ‘cabin’ to the man who owned his own coffee factory – Trumpet Tree Coffee Factory. He said he was now “solid as a rock” in the coffee industry.

But it was more sleepless nights, trying to learn as much as he could about the operations of a coffee factory.

McGowan is now an employer on whom people depend to earn a living. And he needs them. So he operates by a set of care values. Workers must be at work when they should be and do what they ought to do. Problems must be resolved, rules must be obeyed, and, importantly, his workers must be paid.

“The essence of all of this is not for me. This is for the community and humanity. It is about the ­legacy,” he said with conviction, while admitting that the interpersonal element of the operations is the most challenging yet.

McGowan has a staff complement of about 10 regulars, 30 pickers, and during reaping time, another 30-40. And as the chief executive owner (not officer), he said he is involved in all areas (including ­fixing the machines) of the business, which he said is actually four businesses in one – farming, processing, ­administration and marketing.

It is indeed a very challenging venture for a man who is usually not easily fazed. There were times when he said he wanted to call it all off, but, he also said, “When you look at how deep you are embedded in it, and one of the most rewarding things is when you have a group of people working with you, not for me, but with me. That is one of the reasons you stay the course.”

But how does he really cope? He said he takes circumstances for what they are and deals with them, squeezing the positives from them. And he does not necessarily fight back, instead, he prays because he said “the Almighty God” is the main thing in his life.

His life is spent planting coffee on five farms, covering 85 acres, between 3,000 and 5,000 feet above sea level. He produces between 6,000 and 7,000 boxes of beans per annum. His export projection this year is 700-800 barrels. Locally, his products are available in duty-free shops in Ocho Rios, Montego Bay, and Negril.

In April, McGowan and eight other coffee producers travelled to Boston, Massachusetts, in the United States to attend the Specialty Coffee Association of America’s Exhibition, where they showcased their Jamaica Blue Mountain coffee brands in a single booth. The trip was organised through JAMPRO and the Jamaica Agricultural Commodities Regulatory Authority (JACRA).

In terms of where he is coming from – a poor boy from Sugarloaf and Chatsworth districts to now owning a coffee factory – it is considered a significant achievement, but McGowan said it has not changed him.

Yet he conceded that he feels “humbled” and that his father, whom he loved dearly, would “feel good”. He sees himself as an example and prays every day that there could be others like him who can touch lives.

Yet with all of what he has achieved so far, McGowan is not sitting on trumpet tree leaves sipping black coffee like a ‘dry-land tourist’.

“I have come a far way, but in terms of the vision, there is further to go,” he said.

There is much more room for growth. There are more plans, not just for himself, but also for his family, the father of eight children revealed.

“I want it to be one of the leading coffee companies in the world in terms of production. There is no letting up,” said the man who wants his company to be known as one that delivers excellent service and products.

Over the years, he has got support from his overseas clients – Edgar Munn of Blue Mountain Coffee Inc, Andrew Miller of Café Imports, and the board and members of JACRA (formerly the Coffee Board).

And McGowan is giving back to his community by way of creating jobs and buying coffee beans from farmers in the region. Staff and others have also benefited from his back-to-school outreach gestures.

He shared that his children’s education is of paramount importance to him, cognizant that it is difficult to get some young people nowadays to focus.

McGowan is fully aware of his legacy, but are his children ­interested in it?

“Yes, I have children who are interested in the coffee business,” he said, noting that one of his five boys works with him in the factory.

McGowan could be the beginning of a long line of coffee producers in his family.