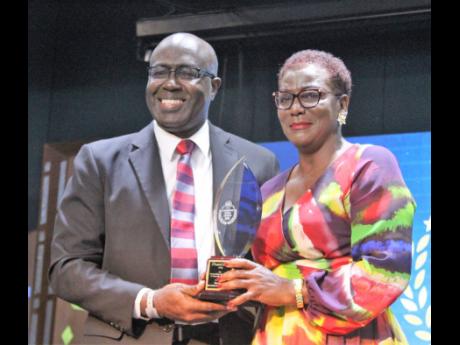 CBU President Gary Allen presents an emotional Emiliana Bernard Stephenson with the President’s Award for her role as Manager of Teleislas in opening cultural and media awareness between the Caribbean and South America. 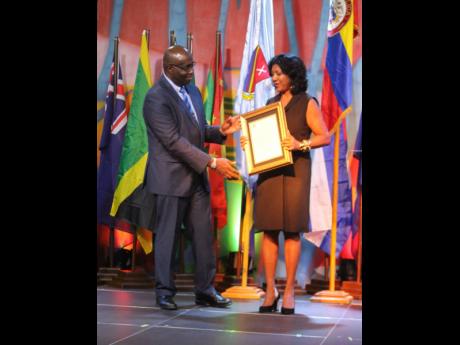 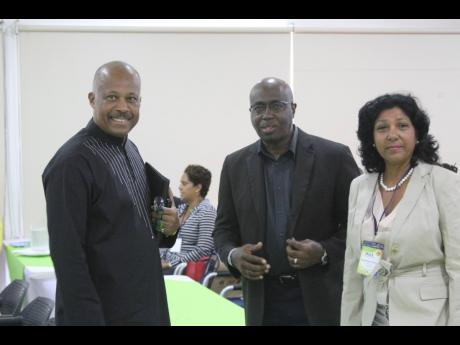 Professor Sir Hilary Beckles, vice chancellor of The University of the West Indies; Gary Allen, president of the Caribbean Broadcasting Union and Shida Bolai, Caribbean Media Hall of Fame Inductee 2019 at the 50th Annual General Assembly in San Andres, Colombia recently where Sir Hilary, who is the region’s spokesman on reparations challenged the media to join the search for answers and action on reparatory justice for peoples of the Caribbean.
1
2
3

Delegates of the Caribbean Broadcasting Union (CBU), last week, recommitted to renewing and re-energising the CBU during the union’s 50th Annual General Assembly in San Andres Island, Colombia. The commitment comes, the CBU said in a release, at “a critical time of change in the global media industry”.

Addressing the assembly on Wednesday, CBU President Gary Allen hailed the present and past leadership of the CBU for their vision and hard work. He said that there is a need for sincere commitment to preserve indigenous broadcasters because of the integral role they play in social and economic development.

Allen urged companies to be prepared for the change from analogue to digital broadcastings, and called for the recognition of the value of the content produced by broadcasters and used on other platforms to generate listenership, viewership, ‘likes’ and other forms of commercialised engagements. He cautioned regulators and policymakers against establishing new monopolies to serve broadcasters, but encouraged them to allow broadcasters to grow and expand their businesses to provide multiple services.

The CBU says its members have agreed to chart the way for a new strategic direction to improve the visibility, communication, membership and cooperation for its existing and future members. They also pointed to the importance of monitoring media rights and freedoms in safeguarding democracy.

UWI TV was inducted into membership of the union as an associate member. Its chief executive officer, Janet Caroo, expressed her enthusiasm in making a broader contribution to the region.

Also addressing the CBU last week, featured speaker Professor Sir Hilary Beckles, vice-chancellor of The University of the West Indies, and the Caribbean Community’s representative on reparations, challenged the union and the wider media to get on board with researching, reporting and interrogating the issues around reparatory justice. He predicted that several European universities and other institutions will be the catalyst of reparatory justice initiatives that will benefit the Caribbean.

Attendees also heard from Inter-American Press Association Vice-President Christopher Barnes, who urged delegates to be vigilant in the fight for media freedom and not to allow “minor” censorship infringements to grow into major media freedom rights issues for the region. Delegates also highlighted the need for vigilance in this respect, pointing out that during the 50-year life of the CBU, journalists have been imprisoned, faced the prospect of imprisonment, and could barely keep newspapers open due to censorship threats in the English-speaking Caribbean.

Options to manage digital switch over

Eutelsat, one of the world’s largest satellite companies, presented options to assist with the process of digital switch over, improving data access and penetration across the region.

The government of Colombia also proposed to provide training for regional media workers on the new Latin America and the Caribbean Information and Communication Technology policy framework that the country had recently approved.

Several messages of support and commendation were given by former CBU leaders at the 50th Annual General Assembly, including former presidents Vic Fernandes and Stewart Krohn. The union also received commendations from Shida Bolai of the CARICOM Secretariat and the Public Media Alliance. The CBU re-elected five new members of its board for a full board compliment at the end of the meeting.

Allen, who is chief executive officer of the RJRGLEANER Communications Group, was re-elected president; while Amalia Mai of Great Belize Production, Channel Five was re-elected vice-president.

The directors are: Anthony Shaw of Starcom Network/Nation Corporation, Kayleaser Deveaux-Isaacs of Broadcasting Corporation of The Bahamas, Sushilla Jadoonanan of DIRECTV Caribbean, Keith Campbell of the Public Corporation of Jamaica, Enrico Woolford of the National Communications Network in Guyana, Victor Torres of the Cuban Institute of Radio and Television,and Emiliana Bernard Stephenson of Teleislas in San Andres Island, Colombia, as its new nine-member board.