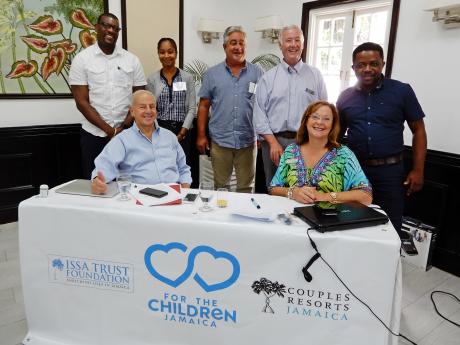 In KEEPING with of its commitment to improving Jamaica’s health sector, the Issa Trust Foundation recently sponsored a two-day seminar aimed at helping the sector convert from film to digital medical imaging.

The seminar, which started at Couples Sans Souci hotel in St Mary, had digital experts Robert Barkema, Gerry Pyne and Craig Hamilton presenting information to help the audience understand digital medical imaging, from image acquisition to transmission of image data to the archiving of images.

Among the topics covered were the basics of computed radiography, basics of direct radiography and transition from film to digital imaging.

In the end, attendees were to determine which digital imaging system in which configuration would best meet the needs of each facility.

Barkema, who is also on the advisory board of Issa Trust, is the owner of Radiology Imaging Solutions, Inc in Michigan, the United States, and has previously worked on projects at the Port Maria and Port Antonio hospitals.

“My goal is to help the folks here not have to reinvent the wheel. I want to shorten their learning curve,” Barkema told The Gleaner on Tuesday after delivering a presentation on transitioning from film to digital imaging.

Andrea Dyer-McKen, coordinator of medical imaging services in the Ministry of Health, welcomed the seminar, saying it was necessary as Jamaica tries to modernise its outdated film-based system.

“It’s very important,” Dyer-McKen said of the seminar. “We’re at a juncture where we’re trying to transition from analog to digital imaging, and we are behind, so with a seminar like this, what we’re actually trying to do is to get everybody on the same page as to exactly what it is we need and how we make the next step forward. The technology that we’re using now is actually redundant, so we actually need to be jumping ahead to get into the digital realm.”

Dyer-McKen said that with funding, the upgrade could be completed in a year.

“For many, many years, we’ve been looking to upgrade to digital image acquisition and storage, and the enlightenment provided by this seminar will aid us in choosing the right system and at the right cost,” Anderson noted.

Meanwhile, Paul Issa, deputy chairman of Couples Resorts and chairman of the Issa Trust foundation, and Diane Pollard, president and chief executive officer of the Foundation, underscored the importance of the two-day seminar.

“Going forward, we are switching from the old-fashioned X-ray, where you use film, to digital X-ray machines, and it’s very important to know the different kinds of digital X-ray machines and what their capabilities are. I think this will go a long way in the public health sector making the correct decisions in terms of what kind of equipment to invest in,” Issa said.

“I’m impressed that we have every single region here that is covered,” Pollard noted. “That shows that they really want to make some decisions, they want to do better for the country, and we’re excited to be part of that.”