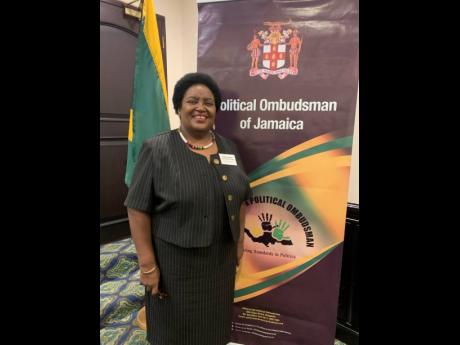 Judana Murphy
Political Ombudsman Donna Parchment Brown at the Forum for Young Leaders to commemorate the 14th anniversary of the signing of the Declaration on Political Conduct held on September 20 at The Courtleigh Hotel and Suites in St Andrew. 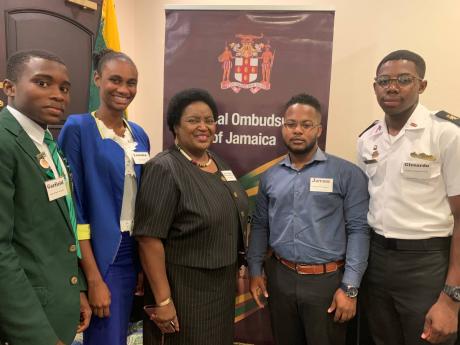 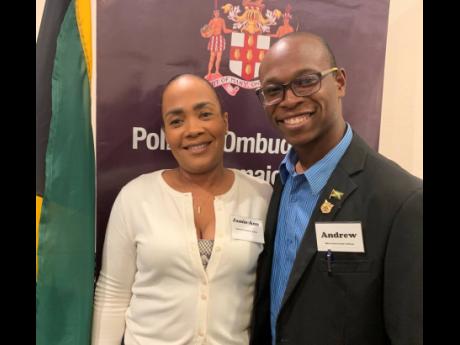 Judana Murphy
National Integrity Action (NIA) Youth Outreach Officer Jamie-Ann Chevannes and Andrew Hinds, president of the Mico University College Guild of Students, at the Forum for Young Leaders to commemorate the 14th anniversary of the signing of the Declaration on Political Conduct held on September 20 at The Courtleigh Hotel and Suites in New Kingston.
1
2
3

Young leaders have called for wider public education about the Office of the Political Ombudsman, which was established in 2002.

The 19 young leaders met with Political Ombudsman Donna Parchment Brown last Friday in a forum commemorating the 14th anniversary of the signing of the Agreement and Declaration on Political Conduct.

The code sets out the standards for the practice of politics in Jamaica and serves to strengthen the existing peace architecture established under the Political Ombudsman (Interim) Act.

In affirming the relevance of the ombudsman’s office, NIA Youth Outreach Officer Jamie-Ann Chevannes said that too many Jamaicans are unaware of the role of the office and how they can assist it in carrying out its functions.

“Public awareness is heavily needed, whether it is on social-media platforms or through forums and focus groups. We realise that our young people are eager, they are willing, but we lack information,” the outreach officer lamented.

Chevannes said in her discussion with some politicians that the code was viewed as a “gentleman’s agreement” and not one that must be adhered to.

“It is needed in Jamaica, and I would like for the office to be strengthened through having more resource personnel and a larger budget because investigations do take a lot of money. The code itself needs to have more sanctions.”

.... Politics not just about jlp, pnp

Andrew Hinds, president of the Guild of Students at the Mico University College, asserted that the view of politics in the minds of young Jamaicans must not be limited to about the two major political parties.

“Civic education is important, and it is something that should be fully endorsed at all levels, especially in traditional and non-traditional high schools, because we are losing our touch, and that is why some of us as young people are not readily open to participate in politics,” said Hinds.

The ombudsman said that the forum was the first of its kind and was necessary for the improvement of how politics operates in Jamaica.

“The level of public knowledge of Jamaica’s institutions, the duties of the institutions, and the rules that govern them – that knowledge is modest. We believe the code of conduct really represents the best aspirations of the Jamaican people to have a politics of which we can be proud – politics based on standards,” she said.

Parchment Brown believes that the participants in the forum can model the standards of the code within their various leadership groupings.

“We are going to review their proposals, and we’re also going to look back at other information we have garnered from different groups since 2015, and we hope to create a document that will help the political parties as they get into campaign mode,” Parchment Brown explained.

She said that political candidates are compliant in signing the code for general and by-elections but that there continue to be breaches of the code.

“There has been an inadequate response from the leadership of the political parties to ensure that they plan their campaigns in a way that avoids breaches of the code or that they quickly hold their members accountable and do not simply rely on public outcry and the Office of the [Political] Ombudsman to do what they have pledged to do,” Parchment Brown said.

Kai Bridgewater, a representative from the Youth Advisory Council of Jamaica, said that while there have been breaches of the code, Jamaica, has matured politically over the years.

“When we look at the elections in 2016, it was a single-seat difference between the two major political parties, and in other third, world countries ,that would mean civil war, but yet, in Jamaica we had a smooth transition of power,” Bridgewater said.

Other areas of concern for the young leaders were political conduct in the digital space and the need to strengthen confidentiality as a means of encouraging Jamaicans to make reports to the office.