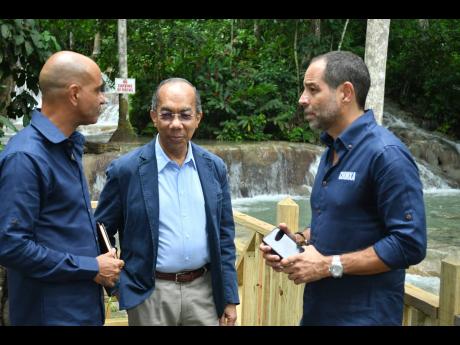 The world-famous Dunn’s River Falls in Ocho Rios, St Ann, known for its lush green vegetation and signature waterfalls, has been given a significant boost with the forging of a partnership with Chukka Caribbean Adventures.

The deal will see Chukka, which has a similar kind of set-up at its Good Hope, Trelawny attraction, introducing what it has dubbed ‘Zipline over Dunn’s River’, “something which should be a guaranteed hit with visitors”, explained Chukka’s chief executive officer (CEO) John Byles.

“People build ziplines every now and again but, unbeknownst to most people is that Chukka was the first to introduce a zipline attraction in Jamaica and in most of the Caribbean,” said Byles, who was speaking at the product launch at Dunn’s River Falls recently.

“This is a first for Dunn’s River and we expect it to do very well with both cruise and stopover visitors, and also with locals. Dunn’s River, as we all know, is a marquee attraction that sells itself. The addition of the zipline, however, will be very significant in that it adds variety and appeal to what is an already successful product and which it certainly is a win-win for everybody,” the Chukka CEO added.

For his part, Dr Horace Chang, minister of national security, who was representing the prime minister, said the Chukka legacy was one of success, and that he expected the owners to carry that “trailblazing record of achievements” over to Dunn’s River.

“What’s happening is that a magnificent property… world-class attraction… has joined up with a world-class company with a great tradition in tourism,” Chang noted.

“This is the kind of partnership that is bound to make Dunn’s River more attractive and which will certainly enhance our tourism product in a big way.”

Chang said the Government was serious about pushing and promoting public-private sector partnerships and saw the new relationship with Chukka as a step in the right direction.

Shahine Robinson, minister of labour and social security, who also spoke at the October 4 event, applauded the Chukka family for what she described as its continued investment in the garden parish of St Ann.

Robinson, who is also the member of parliament for North East St Ann, where Dunn’s River is located, said the Government continues to take great pride in its tourism offerings and sees Chukka as an ideal business partner.

“There is no doubt that this partnership with Chukka will work out,” she added.

In the meantime, Marc Melville, Chukka’s director of Group Revenue & New Development, said the zipline addition would further enhance Dunn’s River’s appeal as “the jewel” of the Caribbean.

“We are very encouraged by what we are seeing throughout the industry so expansion has always been on the table,” Melville said.

“We see an environment being created that is conducive to tourism and we see Dunn’s River as an ideal place for zipline.”

He added that, with tourism being so competitive and with the other islands looking to move beyond mere sand, sun and sea, “it is important for Jamaica’s attractions to stay ahead of the curve”.