The black that she was – Part I 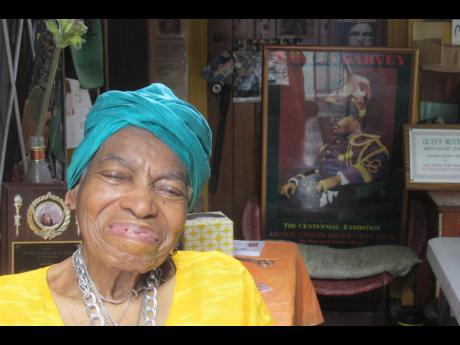 Queen Mother Mariamne Samad’s body, mind, heart and soul were as black as black could be. And she was never, ever going to apologise for that.

Born in Harlem, New York, she grew up in a home of Garveyite parents, and Garvey’s message of black pride and self-acceptance was etched in her brain from she was a tot.

An article published on Saturday, May 23, 1971 in New York’s Amsterdam News, said, “Being a Harlem product this daughter of black-thinking, concerned parents was instilled with the spirit of black awareness early in her life.”

The same article also said this “totally black lady” was determined to help people become “culturally free”. Her black awareness was not all about lip service only; she preached it, lived it and taught it.

She was a popular teacher at the Afro Arts Cultural Centre in Harlem’s Public School 92, and taught black awareness through study at the Nubian Cultural Workshop. As a black power activist she was frequently invited to teach African history in the New York public-school system, and she was not always embraced for that.

“When I first began to lecture on the virtues of knowing our black heritage and being our black selves, many times I was scorned and laughed at, but that didn’t stop me. I continued on anyway. Now, I am happy, because many of my people have soften their hearts and realised what I said decades ago is what is now being done,” she told the Amsterdam News.

She said she brought dignity “into being black” and that dignity was partially demonstrated in the way in which she dressed herself and others. This tailor by training founded the Solomon and Sheba Fashion Shows, and would stage fashion parades and benefits in community churches, halls, and theatres. She would teach the virtues of African culture with clothes, their meaning and history through her Soncure Nubian Cultural Models and Workshop.

Closing her eyes and reminiscing for a while she said, “And boy, did we walk the streets of Harlem in our red, black and green outfits.” These are the colours of the Universal Negro Improvement Association. And when people saw them coming they would stand aside and give way. White men in the subway would get up and offer them their seats.

This was in the late 1940s and early 1950s, long before the Black Power movement took root. She was working with and helping to teach children African culture through the art of designing African clothes. She is credited with creating the dashiki, that loose shirt/blouse made of African prints that took the fashion world by storm in the 1960s and ’70s, and which has been making a resurgence for quite sometime now, especially with the mass production versions.

Queen Mother told The Gleaner how she created the tops for the restless little boys she was teaching based on the shirts that African delegates at the United Nations were wearing. She recounted how much their behaviour changed after they started to wear the dashiki, which is an abbreviated version of an African Arabic, darasakshikaluki-swahili. It has since evolved into a symbol of black identity, which Samad wished every black person would embrace.

Her work as a Garveyite, black pride activist/teacher went across state borders as she was invited by people she did not know to share her knowledge through her lectures, shows, fashion parades and demonstrations. Her work started, of course, in the US, but Jamaica was where it ended.