US public health expert warns virus not going away 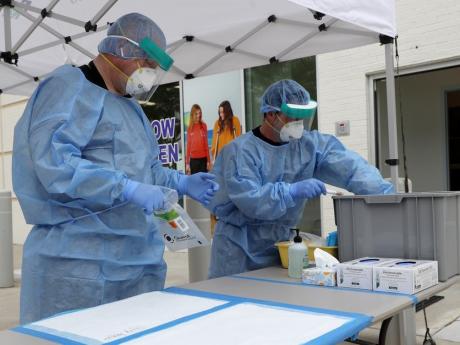 In this April 2, 2020, file photo, registered nurses Jonathan Fisk (left) and Patrick LaFontaine set up a COVID-19 testing station for pre-screened pediatric patients outside a Children's Health PM Urgent Care facility in Richardson, Texas in the United States. A US public health expert says the disease is not likely to go away soon, as only a small portion of the country has been infected (AP Photo).

(AP): A public health expert says COVID-19 still “has a long way to run” in the United States, despite President Donald Trump’s claim last week that it will go away without a vaccine.

Dr Tom Inglesby says it is likely that only a small portion of the country has been infected, “so most of us are still susceptible to this virus.”

Inglesby is the director of the Center for Health Security of the Johns Hopkins Bloomberg School of Public Health.

He says the nation does not have sufficient testing or tracing the contacts of people who do test positive for what he described as a “really nasty virus.” Inglesby says the danger is that as businesses reopen and Americans start to resume normal activities “with increased social interaction, we will again see increased transmission and rising number of cases.”

Reacting to Trump’s assertion that the virus simply will disappear, Inglesby says, “No, this virus isn’t going to go away. Hopefully, over time, we’ll learn to live with it and we’ll be able to reduce the risk of transmission. But it’s going to stay as a background problem in the country and around the world until we have a vaccine.”

Inglesby made the comments on Fox News Sunday.