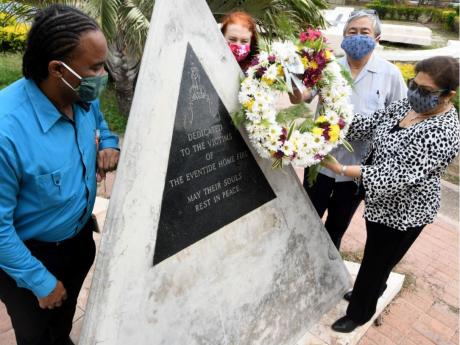 Caribbean Community of Retired Persons founder Jean Lowrie-Chin prepares to lay a wreath. Looking on are (from left) are Errol Howlett, Emma Lewis, and Hubie Chin.

Forty years after 153 old and destitute women died in the infamous Eventide fire, they were this afternoon memorialised by a group including three retirees.

The Eventide women, some blind and many physically handicapped were sleeping when the fire broke out.

Some were buried by their relatives.

However, according to a May 27, 1980 article in The Gleaner, "The charred remains of 145 of the victims of the May 20 fire at the Eventide Home in Kingston were buried in 26 wooden coffins in a single grave at National Heroes Park.”

Thousands of people watched the burial and thousands more attended the memorial service at the Roman Catholic Holy Trinity Cathedral on North Street.

Today, four members of the Caribbean Community of Retired Persons (CCRP) paused at the Heroes Park monument to pay their respect.

CCRP founder, communications consultant Jean Lowrie-Chin said the women did not deserve to die the way they did.

She said today's memorial was important in promoting respect for the elderly.

She said the elderly deserve care and protection even if they have fallen on hard times.

More than 50 women survived the tragedy and were relocated to the newly built Golden Age Home on St Joseph's Avenue in 1984.