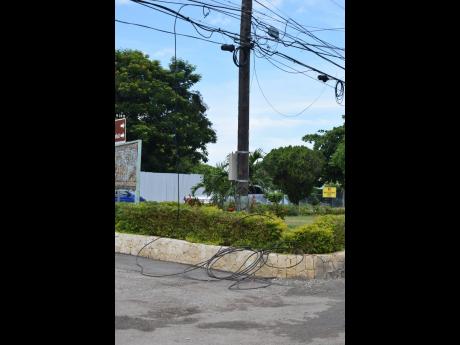 Montego Bay Mayor Homer Davis has made a bold move to put an end to the many instances of dislodged cable wires hanging from Jamaica Public Service Company (JPSCo) poles across St James, which have been exposing members of the public to danger and distracting from the aesthetics of the surroundings.

According to the mayor, who is also the chairman of the St James Municipal Corporation, the time has come for cable wires belonging to major service providers such as FLOW, Digicel, Cornwall Communications, among others, to be properly secured on the JPSCo poles, ending their threat to public safety.

On Friday, June 19, Mayor Davis led a delegation comprising representatives of the JPSCo and other service providers on a tour of Jimmy Cliff Boulevard, where a number of breaches were observed. He managed to secure an assurance that the faults pointed out would be immediately addressed.

“For a very long time, the issue of cable dangling from JPSCo poles has been a concern to the St James Municipal Corporation. The matter has been on the agenda of the corporation’s Physical Planning and Development Committee meetings for a while now, so this is a major step forward in having the issue addressed,” said Davis. “These cables are what they are and citizens may not be able to identify electrical cables from data cables, so the dangling wires pose a threat to life and property.”

During the tour, the representatives of the companies involved admitted that enough attention was not being paid to the maintenance of the cables and that going forward, that situation will change.

“The running of cables for phone, cable and Internet service has become a part of the daily operation of these companies. However, I am sure that as a result of this meeting, we should see a more professional approach being employed in the running and maintenance of cables,” said Davis. “We have seen where disconnected cables are allowed to dangle, cable not being affixed properly, which are real and present danger to the citizens of our city and parish. The discussion during the tour was frank and direct, and company representatives willingly admitted the faults relating to their cables and the way is now clear for a new approach to the running and maintenance of these cables.”

“Among the new policies going forward is a colour-coding of the cables, giving each supplier a specific colour tag, which will be affixed to their lines. This will be an easier way to identify which company’s cable is loose, and they can be contacted directly and immediately. Where JPSCo poles have been changed and the old pole remains because data cables are still affixed to then, these will be removed immediately,” added Davis.

The mayor said that once the issues on Jimmy Cliff Boulevard are addressed, the focus will move to the other areas of Montego Bay and the wider St James.