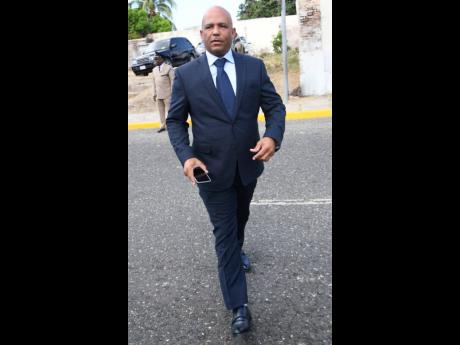 JAMES ROBERTSON is confident that, in addition to regaining the highly contested seat of Western St Thomas for a fifth term, his winning margin will far exceed that of his previous years.

Robertson claimed the seat in 2002 when he defeated the People’s National Party’s (PNP) Anthony Hylton by more than 1,000 votes.

Blaming the decrease in his numbers over the last two elections on the ‘difficult times experienced by the people’, Robertson said, “We are in the poorest parish and constituency, even though the east is being battered with the shutdown of sugar. It is very difficult for people who are suffering, no roads, no infrastructure, no water, high cost to educate their children and for medical attention for the elderly because of transportation cost,” said Robertson.

He added: “These people, West St Thomas citizens, have stayed loyal and you’re going to see margins now go back to 4,000. I have been working with them, going through the difficult times with them. Young people who can’t find the money to educate themselves, we have helped thousands. We had gone through a very difficult time and now we have the greatest expenditure of tax dollars since Independence per capita in Jamaica, and I must say thanks to the JLP government led by Andrew Holness.”

Among his achievements, the incumbent member of parliament listed what he referred to as the delivery of a two-lane highway from Harbour View to the Yallahs Bridge, proper road structure from Yallahs to Morant Bay, drainages, new water pipes, new wells, new bridges and community centres.

When asked whether this will be his final election regardless of the outcome on September 3, he laughed; “At 54 [years old], I challenge any of the existing MPs to a physical test.”

“If I am able to get the level of achievement that I have now accomplished as a representative in politics, I would have to look seriously at completing the work started by Errol Anderson, Robert Lightbourne, two great representatives of West St Thomas whose work stands out for itself. “

He added: “Building back communities now with infrastructures that are going to be in place is my priority. We have done the highways and infrastructure, we are now going to do the byways … we’re going to be looking at youth employment. When the new town centre is built, people are going to be coming from all over for jobs in St Thomas … . Who wouldn’t want, with that level of success, to continue to fight on?”

On the issue of the last-minute replacement of Mark Malabver with Marsha Francis in the race for the coveted seat, Robertson said, “That’s PNP business. They were showing poorly in the polls, their own soundings. Once they realised that they weren’t going to win West St Thomas, they decided what was next most important on their list, and that is a bigger politics.”