Man gunned down on Chancery Street in St Andrew 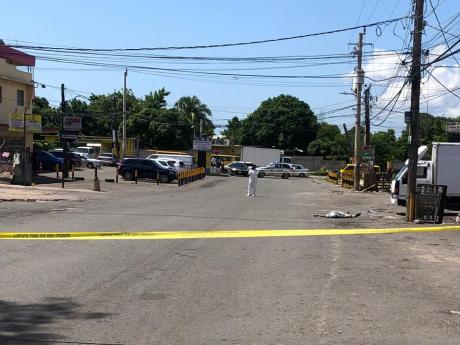 A section of Chancery Street in St Andrew cordoned off by the police following a fatal shooting on September 22, 2020 - Andrew Williams photo

The St Andrew North police are probing a murder that occurred in the busy Chancery Street square, in the vicinity of the old Price Rite supermarket.

The police have identified the deceased as 60-year-old Zachariah Green, otherwise called 'Zackie', of Molynes Road in St Andrew.

The police report that about 8:00 a.m., Green was standing on the roadway ‘loading’ a taxi when a lone man on foot allegedly approached and opened gunfire hitting him multiple times to the upper body.

The shooting caused persons to run for cover.

Investigators told The Gleaner that Green lost a son some months ago to the ongoing violence along Chancery Street, a heavily trafficked transportation and shopping zone.

Our news team visited the scene where we saw sections of the roadway cordoned off and persons gathered in groups discussing what had transpired.

A passer-by was in disbelief that Zackie was gunned down.

“He is out here every day, every single day, even during the upheaval. I don’t know of him and anybody have anything. Is a big man, you know,” the passer-by told The Gleaner.

The division has seen close to 10 killings, including a double murder along Chancery Street over the last year.

Up to Saturday, September 19, 49 were killed in the St Andrew North division.

Forty-five homicides were recorded for the corresponding period last year.

Shootings have risen by 52.6 per cent.