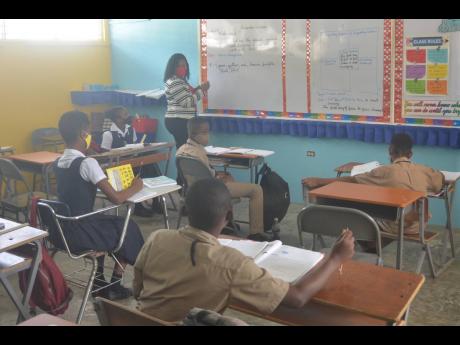 Photo by Christopher Thomas
A teacher interacts with students on Tuesday, the first day of face-to-face classes at Somerton All-Age and Infant School since schools were ordered closed in March.

Face-to-face classes were completed successfully at Somerton All-Age and Infant in St James on Tuesday as a 17-school pilot got under way with COVID-19 social-distancing and sanitising protocols.

Somerton was one of three schools in the Ministry of Education’s Region Four that hosted in-person sessions. Chatsworth Primary and Infant in Maroon Town, St James, and Chantilly Primary, in Lennox Bigwoods, Westmoreland, were the other two schools.

Glendon Brydson, principal of Somerton, said the entire school family welcomed the return of face-to-face classes, which were halted in March two days after the new coronavirus was detected here.

“We are quite comfortable with it (face-to-face), since we were unable to reach some of our students, and we want to have all of our students in the teaching and learning aspect of the school,” said Brydson.

For 11-year-old grade-six student Dante Johnson, it was a joy to be able to reunite with his teachers and schoolmates after being away from the physical classroom for eight months.

“It feels amazing to be back at school,” the relieved youngster said. “Doing the protocols is keeping everyone safe, so it is fine.”

Grade-one teacher Romair Thompson, who is also the parent of a student at Somerton, expressed confidence that the COVID-19 protocols would be maintained and the school population protected.

“The place is properly labelled and the distancing and spacing are measured and carried out in the right manner. We are just hoping the students will adhere to the instructions and guidelines given,” said Thompson.

Dr Michelle Pinnock, regional director for the Ministry of Education’s Region Four, said that the schools will conduct classes on a phased basis, with a full roll-out experiment on Thursday and Friday.

“It is a staggered reopening, which means that for all three schools, we did not take the whole school out today. For Chantilly Primary, we took the infant class and grades two, four and six; while for Chatsworth Primary, we had grades four, five, and six; and at Somerton All-Age, we had the Infant 3, and grades one, five, and six,” said Pinnock.

The pilot resumption of face-to-face classes at the 17 schools was slated to begin on Monda,y but was postponed to Tuesday because of inclement weather.

Yallahs High in St Thomas delayed its opening to today because of flood conditions.