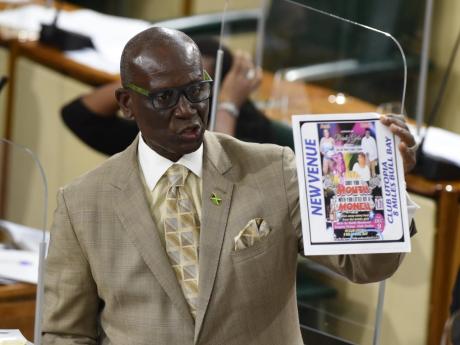 Local Government Minister Desmond McKenzie says more than 300 events are being held on a weekly basis although municipal corporations have not been issuing any permits for the past five months because of the coronavirus pandemic.

The minister also told the House of Representatives on Tuesday, that the authorities have been seeing a “worrying” decline in the level of compliance with the COVID protocols especially in bars.

“There are bike shows, wakes, grave-digging ceremonies, church service where the numbers have exceeded the requirement, round robins, street party in every nook and cranny of the country,” said the minister, as he reminded that COVID-19 containment measures have been extended to January 15, 2021.

McKenzie said the authorities have unveiled that businesses registered as restaurants have been operating as night clubs.

He also said unscrupulous promoters have been falsely printing on fliers that their illegal events have been endorsed by municipal authorities.

Local Gov't Minister Desmond McKenzie has warned that the authorities will be vigilant against illegal parties. Speaking in Parliament, he revealed that several parties are being promoted but said the authorities will not allow them Full video: https://t.co/xEmeP85F9j #GLNRToday pic.twitter.com/IBXWltXCMM

The minister listed a number of events, which have been scheduled for later this week and said last weekend, a major event was held on Dunrobin Avenue in St Andrew.

"When the video was sent out and the count of motor vehicle was done, nearly 150 motorbikes lined both sides of the road. And the information that we have garnered is that the activity was closely monitored. The police have been provided with the relevant information and video footage and the investigation is actively taking place and the necessary charges will be laid once those investigations have been concluded,” McKenzie said.

He said these illegal events have several implications for Jamaica's COVID-19 fight.

In the meantime, the closure order imposed in August for some 17 beaches and 19 rivers will continue.

“This is important as we have observed, there are certain breaches of these provisions in various parts of the country and those are who are committing these offences cover every spectrum of the society,” said McKenzie.