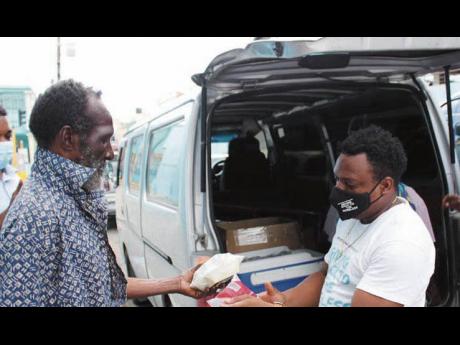 ADDING A mask and a bottle of sanitiser to his yearly rounds, Ricardo ‘Mr Volunteer’ Burke will be braving the unpredictability of the pandemic to ensure some 200 of the displaced population receive a warm dinner on Christmas Day.

While the 34-year-old philanthropist has made it his point of duty since 2014 to cater to the less fortunate all year long through his non-profit foundation called Yutes4Change, he amps up his support of the underserved during the Yuletide season.

With various projects planned in December, Burke, who prides himself as the Ghetto Santa, will also be delivering gifts on Christmas Day to unsuspecting children across several rural communities in his hometown of St Thomas, and in Gregory Park, Portmore where he now resides.

Excitedly sharing his plans for the period, the young man with a big heart said, “We’ll be making snack packs and will be distributing them to 20 students who are doing online classes at home, tomorrow (Tuesday) in Gregory Park.

Then, on Sunday, we’ll be heading over to St Thomas with about 80 care packages containing food and toiletries,” he said, adding that among the eight communities which will benefit are Dalvey, Duckenfield, Winchester and surrounding areas.

Burke, who left his 9-to-5 job in 2014 to fully focus on his philanthropic efforts, currently has over 60 volunteers across the various arms of the foundation, who are also dedicated to the cause.

Yutes4Change Foundation established a Homework and Integrity Centre in 2016 and opened its doors to some 30-odd students who needed academic help or those without Internet access at home.

Burke and his team also run a Breakfast Programme which provided a healthy start to days in the lives of many. However, since the onset of COVID-19, the numbers served in each programme have significantly decreased.

He said, “When school reopened on October 5, we also reopened our Homework and Integrity Centre to facilitate a few students. We currently provide computers for only 8 high-school students to access their online classes. If others have their tablets, we create a space for them to use the Internet, too, but we don’t exceed 12 students at a time, and ensure that they do not leave their designated space. We also provide disposable masks and alcohol for them to sanitise throughout the day, and our team sanitises the computers after use. Where the breakfast programme is concerned, we have paused until January, because of COVID and also a shortage in donation. We’ve also suspended all youth meetings, but still manage to engage our membership virtually and have done a few care package outreaches.”

Burke previously shared that his passion for giving was born out of his own lack as a child and, while he agrees that his ‘why’ hasn’t changed, he admitted that he is also fuelled by the joy giving brings, especially during the Yuletide season.

“Christmas is for gathering as a family and sharing in a meal. The homeless also needs people to share with so they can feel like they are a part of a family and there is still support for them. Also, growing up, we would watch Christmas movies with Santa bringing gifts to children, making them happy, and I want those in the inner city and rural areas to have that feeling too,” he said sharing the reason he wears a Santa hat when delivering gifts.

“We will also be hosting an essay call-out, not competition, encouraging students to write on how COVID has affected them academically. Two students, one from St Thomas and the other Gregory Park, will win a tablet. These devices will be provided by a diaspora contributor, Youlanda Patmore of Patmore Diamonds, who will also be repainting our Homework and Integrity Centre for Christmas,” Burke said, adding that persons can assist the foundation’s endeavours by donating food items.