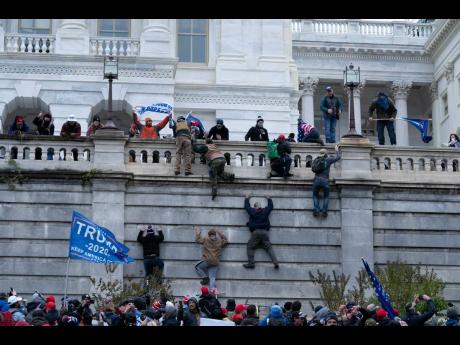 AP
In this January 6, 2021, file photo, supporters of President Donald Trump climb the west wall of the US Capitol in Washington, DC. 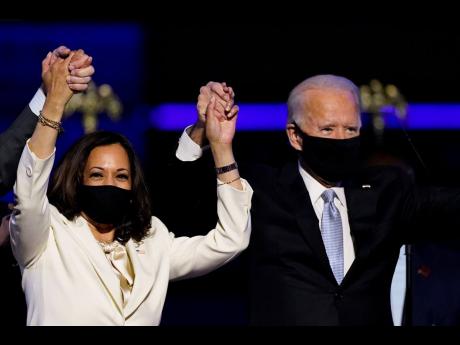 A 73-year-old Jamaican grandmother who lives in Virginia in the United States is hopping mad.

The woman claims that her grandson was among the police officers who were assaulted by protesters who stormed the Capitol Hill building in Washington, DC, on January 6.

The woman’s voice trembled as she spoke to The Sunday Gleaner last week, on condition of anonymity.

“I have lived out my life so there is nothing for me to be afraid of any more. But I cannot reveal my identity because I have to protect the security of my relatives, so please don’t call my name. But I have to express myself because what happened to my grandson is just terrible,” the woman said.

The US was shaken to its core after supporters of outgoing president, Donald Trump, wreaked havoc as legislators were ratifying the recent win at the polls of President-elect Joe Biden. They stormed the building after being egged on by the defeated Trump, who had earlier addressed them at a rally.

Five persons, including a policeman, died and several others injured in the violence.

The Jamaican grandmother was livid that the Trump supporters were allowed to hold the country’s seat of power at bay.

“My grandson was beaten and almost lost his life. They called him nigger so many times, and if he wasn’t smart he would have been dead too. They do not want to tell you but it is stink that the police were given orders not to take any serious action as the people were not expected to get so violent. This is such a shame,” she said.

The woman said her grandson is still sore from the beating he received and is contemplating turning in his badge.

“He is very dejected after serving his country and being treated this way. Nothing has changed in the US. It does not matter what we do as black people, there is no honour for us. I have lived in America for over 50 years and seen black people take one step forward and two steps backward. It is a crying shame what they did to him,” she said.

Almost 200 persons have been arrested in connection with the incident, which has resulted in the second impeachment of Trump, who may face criminal charges after being accused of inciting an insurrection.

Racial tensions are running high in the US, and Jamaicans who reside here are wary as the January 20 inauguration of Biden and his deputy Kamala Harris draws near.

For Nicholas Bell, who resides in South Florida, the storming of the capital is simply a case of the chickens coming home to roost.

“I am not sorry for those policemen. These are the people who kill unarmed black people when they are running from them or sitting in their cars. Then a gang of white thugs come and beat you sick and not one shot fire? As a black man who has been harassed by police more than once, I cannot understand how a human being who is armed allows himself to be beaten without defending themselves,” Bell said.

Port St Lucie resident Marie Lewis expressed fear for her safety and urged persons of colour to be vigilant as they go about their business in that South Florida city.

“I have seen men in trucks with the Confederate flag on the back of their vehicles driving around as if they own the world. They are very bold and I am really not taking any chances. It is sad that Trump could not accept defeat and had to go to such depths. People had to die? I don’t think we have seen the end of this,” she said.

The Sunday Gleaner reached out to several elected officials and business owners in South Florida; however, all declined to go on record to comment on the issue.