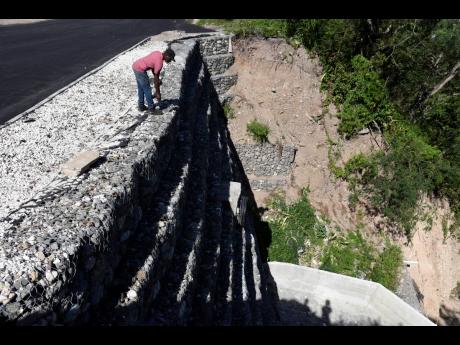 File
In this December 2020 file photo, Isaiah Grant points to an area of the repaired Sir John Golding Road which opened to public but no guard rail has been installed, raising concerns from community members and users of the road. 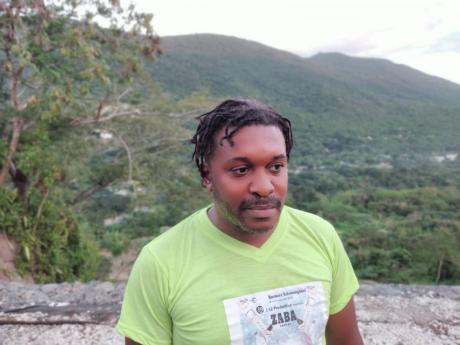 Jason Cross
Taxi driver and August Town resident Anthony Thompson describes the restoration to the Sir John Golding Road in St Andrew as shabby. He commented that guard rail should have been erected at a section of the roadway where persons can fall over a precipice.
1
2

The newly repaired Sir John Golding Road was reopened by the National Works Agency (NWA) on January 12 after the popular thoroughfare became unsafe, following extensive flood damage in 2017, and was subsequently closed for repairs.

The road, which runs parallel to The University of the West Indies, Mona campus and links August Town to Papine, is known for its high usage by motorists and pedestrians.

The NWA said that comprehensive works done to reinstate the roadway include the construction of a gabion retaining wall, the re-engineering and replacement of existing drainage facilities, the installation of safety features such as guard rail, and the reinstatement of the road surface.

However, when The Gleaner visited the area, one main component, a guard rail which the NWA said had been erected, was missing from the project and was of concern to even residents who were glad to see the roadway reopened.

A female resident told The Gleaner, “We glad to see the road open, but where are the rails to prevent students from going over there? Are we going to wait until something happens? The Hope Valley Experimental School is right there and these kids love to explore.”

Some residents are questioning the delay in getting the guard rail installed.

Taxi operator and August Town resident Anthony Thompson said: “For three years waiting, we glad that it reopen, but currently, looking at the finish product on the entire back road, I think they could do a better job than this, the contractors. I think the contractors in Jamaica are joking, because this is not even safe for the kids at the moment; but I heard the road wasn’t open is because they were waiting on guard rail.”

Thompson said value for money is important in these hard times.

“I think that they could do a better job, because I think they were going to barber green the entire road go to Bryce Hill Square and mek it look more uniform… for so much money, I heard this was $84 million dollars (the cost to repair the road)… dem could do better for the completion. We still have pot holes,” Thompson said.

On New Year’s Eve when The Gleaner visited the area, an elderly August Town resident, Isaiah Grant, said he was anxious for the reopening of the roadway. He was concerned, however, that a section of the roadway needs guard rails or a wall to reduce the risk of danger for pedestrians, including children.

“Up deh so now, it need some form of protection, right at the side of the curve wall. Can’t leave it so. Remember say one school up deh suh,” he said, referring to Hope Valley Experimental. “Pickney a pass and rude pickney go push one, you see the danger?” Grant said in a January 4 publication of The Gleaner.

Some members of the Sir John Golding Rehabilitation Centre who use wheelchairs are welcoming the reopening of the road.

Marcus Banton said: “Fi something for the past two years now, dem surely tek dem time. This should have been done long time, because when it did start me hear they got funding for about 60 million for it and dem claim say dem fix it and it mash out again; dem tek dem sweet time dweet again ... . It’s good that it open because it convenient for a lot of people.”

His colleague, Vinnette Green, was also thankful because of safety concerns, citing numerous cases where people have been held up and robbed when the roadway was closed.

She said, “It was really complicated. Through the breakaway, I had to go up there to catch the bus. Sometime I reach up there the bus gone already, and I have to wait a long time before I get another bus.”

Stephen Shaw, communications manager at National Works Agency, could not be reached up to press time for a response regarding the release sent to the media that pointed to guard rail being installed.