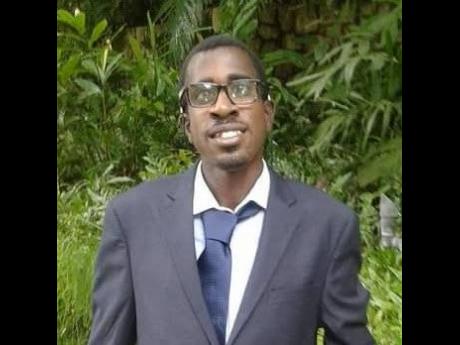 Armed with a bachelor’s degree in law, Garnian Hazel, a visually impaired resident of Success district in Hanover, says he wants to help prevent children involved in domestic conflicts from ending up in the country’s judicial system through Alternative Dispute Resolution (ADR).

It is for that reason that the 25-year-old, who was born with vision impairment, pursued a career in law, majoring in family law and ADR. In fact, when he commences his study at the Norman Manley Law School later this year, it will be his primary area of focus.

The prospective lawyer believes that, in helping to prevent domestic conflicts among the country’s youths, he will be helping the court to reduce its backlog of cases.

“I want to do ADR and family law as it relates to children. I want to use the ADR methods to assist children who are most vulnerable in society to see that they don’t have to go to court, but they can sit down and discuss their differences in an amicable way,” he said.

Hazel, who is spiritually rooted in his Christian faith as a member of the Success Seventh-day Adventist Church, is the fourth of five children for his parents Loveta and Mervin Hazel.

The aspiring lawyer told The Gleaner that he had to manoeuvre several medical hurdles before he began his academic journey, as he had to undergo three major operations on his eye to remove cataract and glaucoma at the Cornwall Regional Hospital.

Like many other children in rural Jamaica, Hazel started to develop his locomotor skills and learning patterns at the Success Basic and Success Primary schools in his home district before moving on to the Knockalva Technical High School, also in Hanover. “I attended both the Success Basic and Primary schools where I encountered some challenges because not many people understand how to operate and treat people born and living with disabilities,” Hazel said.

However, despite his early challenges where he encountered being ridiculed, Hazel never lost his focus and managed to pass 10 of the 11 Caribbean Secondary School Certificates (CXC) subjects he sat, having earlier gained success through the then Grade Six Achievement Test to earn his place at the Knockalva Technical High School.

“I was awarded a place at the Knockalva Technical High School and, while there, I was elected class captain in Grade Nine, but two years earlier, I outperformed all my peers in Grade Seven during an internal reading competition,” revealed Hazel. “In Grade Nine, I did two CXC subjects, and passed them, I got grade two in integrated science and Grade Three in social studies.”

Determined to succeed despite his visual impairment, Hazel sat CXC English and mathematics in Grade 10, copping a grade two for English, but he failed mathematics. “In Grade 11, I passed human and social biology, religious education, and principles of accounts with grade two; information technology, office administration, physical education, and principles of business with a grade one,” said Hazel, whose mother worked as a janitor at his primary school.

Apart from Hazel’s academic achievements, he was also busy offering leadership to his peers and other junior students at Knockalva, serving as the school’s head boy.

“In Grade 10, I ran for deputy headboy and won, after which I was promoted to head boy in Grade 11, where I was the valedictorian at my school-leaving exercises,” he told The Gleaner. “I later enrolled at the Montego Bay Community College where I did an associate degree in business studies.”

According to Hazel, he received assistance from his teachers and lecturers along his journey to achieving his bachelor of laws degree.

“They ensured I was able to move around with much comfort. At Knocklava, even though I was able to move about and do things for myself, the students there showered me with much love and appreciation. They would come and meet me upon my arrival at school and ensure that I got on my transportation back home,” recalled Hazel. The aspiring lawyer has credited several persons for his current academic achievements in his quest for higher education. The list includes his parents, his sisters Kerrian, Tanya, and Tamar Hazel, along with the Katrin Casserly-led Hanover Charities.

Naturally, Hazel’s mother is extremely proud of her son’s achievements to date, and is confident that he will continue to make his family happy.

“When he faced those hurdles in his earlier years, it made him stronger,” said the thankful mother. “It was never a nice experience in his early years when he encountered some challenges, as many people had no experience in dealing with persons with abnormal conditions.”