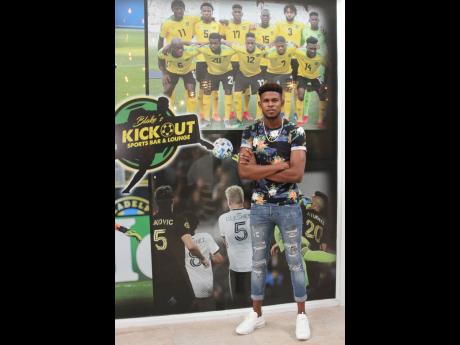 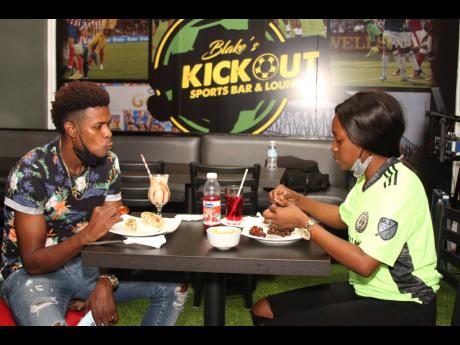 Nathaniel Stewart/Photographer
Owners of Blake’s Kickout Sports Bar and Lounge Andre Blake and his wife Shauna-Kay enjoy a meal at their newly-opened establishment. 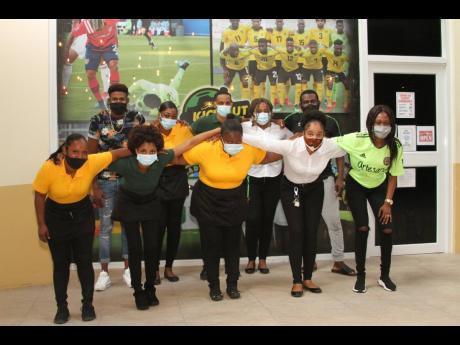 Nathaniel Stewart/Photographer
Andre Blake (back row, left) and members of his staff at Blake’s Kickout Sports Bar and Lounge. 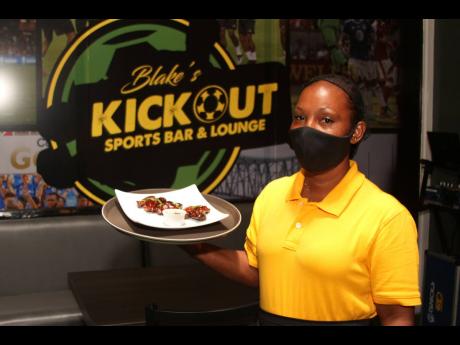 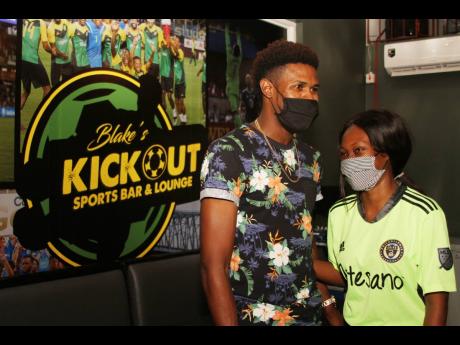 Goalkeeper for the senior men’s football team and former Reggae Boyz captain, Andre Blake, has kicked his way on to the entrepreneurial field.

On February 6, the 30-year-old launched his business, Blake’s Kickout Sports Bar and Lounge at the newly opened Millennium Mall in May Pen, Clarendon.

Blake told The Gleaner that the concept for the business stemmed from his desire to bring a “Kingston vibe” to Clarendon.

“I don’t think we have anything like this in Clarendon. I think this is a step in the right direction, to be able to give people in the parish something to enjoy,” he noted.

The 2017 Golden Glove awardee said the main aim of his business was to offer employment to Clarendonians.

“I’m business-minded and it’s something I’ve always wanted to do. This is me coming back and doing something, not just for myself, but something where I am able to employ people. For me, this is very important because it’s a dream come true and I’m very excited,” he said.

Citing a first-hand experience with poor customer service, Blake said, “This is my brand and everybody knows what I’m about ... high standards. In Jamaica, customer service is not usually the best. I’ve had multiple experiences, so I want to start a change.”

“I want to ensure that whenever you come to Blake’s Kickout Sports Bar and Lounge, you get the best ever – best customer service, the best food – because I know how much it means to go out and be able to enjoy dining and having a fantastic experience,” he said.

Blake, who hails from Canaan Heights in the parish, a neighbouring community to where his business is located, cited financial woes as his motivation for starting his own business.

“For me, it was a struggle. I wasn’t from a financially stable background, but I knew what I wanted and I knew that football could be a way out for me, so I was very dedicated and committed to follow my dream.”

He lauded the residents of Canaan Heights, stating that they had always supported him since his days of schoolboy football at Clarendon College and Glenmuir High.

“It’s just a testament that good things do come from the ghetto. No matter where you’re from, you can make your own decisions and decide your own destiny,” said the star athlete, who also plays for the Philadelphia Union in the United States.

Images of Blake and his Jamaican teammates are mounted on the walls of the sports bar. When asked why he incorporated images of his fellow players into his brand, he said, “It’s not just about me. It’s a sports bar and I play a team sport ... I don’t play alone, so I think it was important to have some of my colleagues up there with me to share in the moment”.

Blake, a father of two, said his wife and business partner, Shauna-Kay, played an integral role in his business idea becoming a reality.

She told The Gleaner that executing the project, which started in March last year, was no easy feat.

“It was a lot of work. A lot of times you see the end product and it’s beautiful, but many persons don’t see the behind-the-scenes work,” she said.

“We believe May Pen needed something like this and we spoke about it, and I said ‘Hey, you have this idea, let’s just start this’, because dreams don’t work unless you do,” she added.

“We want when people think of this place, they think quality and excellent customer service,” said Shauna-Kay.