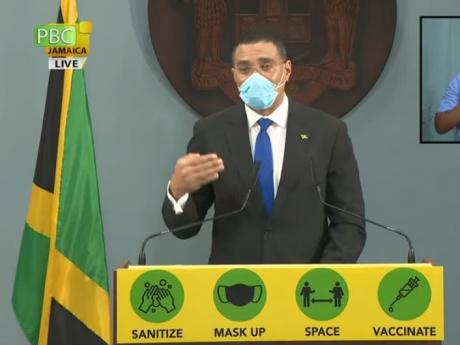 “We are not tolerating it,” said Prime Minister Andrew Holness, insisting that he is now certain that the policy direction is clear that people must wait their turn.

Prime Minister Andrew Holness has revealed that in just under two weeks, 94 people who did not have appointments have received the COVID vaccine.

It’s the exact opposite of firm instructions the Prime Minister issued ahead of the rollout when he warned that there would be consequences for officials who facilitated the breach.

So, what action has the Prime Minister taken since he discovered that his instructions were disobeyed?

It’s one of several questions posed to Holness on Sunday.

“I can tell you that the permanent secretary and the minister can tell you what I have done and what they have done as a result of that,” Holness replied, referring to the Health Ministry’s chief accountable officer Dunstan Bryan and Health Minister Dr Christopher Tufton.

He accepted that directives are not always immediately followed.

Holness also said the Health Ministry has issued circulars to all persons administering COVID vaccines instructing that they abide by the schedule.

“We are not tolerating it,” the prime minister insisted, saying he is now certain that the policy direction is clear that people must wait their turn.

As at Saturday, 24,502 persons had received their first doses of AstraZeneca vaccine.

Tufton said Jamaica is now at 1 per cent of its vaccination target of 2 million.

Healthcare workers, the police and members of the army have so far received their first vaccine as well as some elderly people.