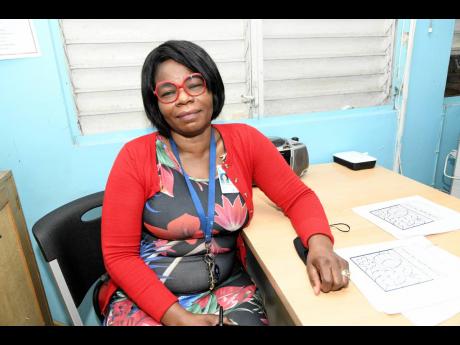 It was the sixth sense of a concerned educator which led to the revelation that many of the children under her care were suffering great economic hardships, even though they were separated by distance.

With face-to-face classes suspended, grade-six teacher at the Elletson Primary and Infant School in downtown Kingston, Karen Gowie-Williamson, was caught up in preparing her students for the Primary Exit Profile (PEP) examinations, which is set for Wednesday, May 26, when she picked up on a recurring issue, which piqued her curiosity.

“Whenever I am online and I send them off to lunch, I realised that there was often a little rustling, especially if their picture is not up - because I tell them to block the screen because usually there are so many things happening in their homes at that time. So when I ask, ‘You’re still online?’ they say nothing, but you know that they are still online. So I coax them by saying, ‘Come, talk to me. I am your friend, your teacher. You can talk me.’”

The answers that came back stunned the teacher.

“Well, Miss, nothing is here.” And when she inquired further, the responses were heartbreaking. “Me say, ‘Not even likkle sugar to make some sugar and water?’ and they say, ‘No, Miss, nutten. Everything finished.’”

A survey conducted by UNICEF has confirmed the devastating socio-economic fallout caused by COVID-19 on some Jamaican families, and spoke to the importance of school attendance to the overall well-being of children.

“Of households with children we surveyed June to August last year, approximately 80 per cent suffered a reduction in income and 44 per cent of families experienced food shortages, and female-headed households face greater challenges in income loss and food shortages. Prolonged school closure also impacted schoolchildren, taking away the opportunity to learn with their friends, accessing school meals and the safety net that school provides to schoolchildren from violence, abuse and exploitation.”

As she learnt about the daily deprivation of her students of simple, basic, essential needs, Gowie-Williamson was driven to find out more. Some of the coping mechanisms between online sessions defied logic, as in the case of one student she visited.

“He took me to his garden where he is growing scallion. As we talked, he explained that caring for his scallion crop – watering, weeding and so, was how he alleviated the hunger until the next session. So I was trying to convince him to come to school because I would then be able to carry some lunch and share with him, because when they are at home I can’t do anything for them.

“Actually, school is a safe haven for children, but I think those so-called (education) stakeholders/policymakers need to get input from teachers who know about the root causes of everything that is happening within, and affecting, schools. They don’t understand, they just stay up there and make plans and strategies on issues of which they are not aware of the root causes,” she declared.

Like Mariko Kagoshima, Gowie-Williamson went on to underscore the central role of schools in the daily lives of children as more than just a place for education.

“This is where they survive ... this is their habitat. It is not only where they come to learn, it is their place of abode till when night comes, to go home and come back the next day. So that is one of the issues that we are facing – the children are online, but they are hungry, and so sometimes for the second session, you’ll find that they come on late and I’ll say, ‘What happen?’

Scared for these children, the educator’s maternal instincts kick into overdrive, especially when she recalls the gritty, inner-city neighbourhood in which they live.

“I have to do I tell them to stay inside the house, because you have to remember the type of area that they are living in, and sometimes I am online and suddenly I hear ‘Pap pie, pie, pie!’ – the sound of gunshots, and I have to tell them to go down (on the floor) and stay down. I have to be telling them to get flat and don’t talk on the phone, because I don’t want anyone to think you are an informer and come and hurt you. Because they (criminals) don’t have any regard for life; it doesn’t matter whether you are children or adults.”

COVID-19 has taken a heavy toll on the living standards in these communities, which were already depressed because of the failure of the State, over the years, to make adequate infrastructural and other investments. Now Gowie-Williamson is appealing to policymakers to do a little more for her students.

“They need to start back the school-feeding programme – not the bun and bulla, but something much more substantive. Even put a good piece of cheese, a real piece of cheese with it, so that they can get some protein, with some fruit drinks, real fruit drinks. The policymakers should align themselves with the farmers who were having problems with their surplus production. When their goods are not selling, buy it from them and make fruit juice and bring it to the children.