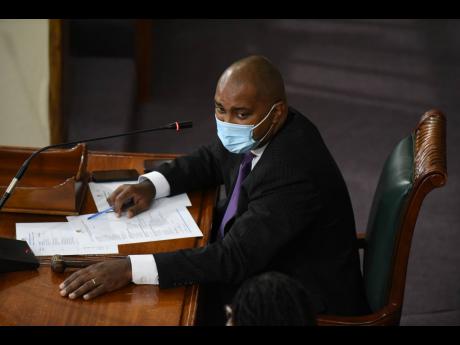 A probe by the Public Accounts Committee (PAC) into worrying internal audit findings at the Ministry of Labour and Social Security that repeatedly flagged significant internal control deficiencies is expected to resume next Tuesday after a one-month hiatus blamed on COVID-19.

Julian Robinson, chairman of the PAC, told his colleagues on Tuesday during a sitting of the committee that he had received reports that officials from the ministry have been in quarantine owing to concerns linked to the highly contagious virus.

Technocrats from the Ministry of Local Government and Rural Development who were in the queue to appear before the committee could not attend as they were also reportedly in quarantine stemming from the impact of the pandemic.

COVID-19 has dramatically surged since early February, with deaths linked to the disease now at 542, pushing the Holness administration to impose three consecutive weekend lockdowns as well as tough restrictions for the upcoming Easter holidays.

On Tuesday, the committee discussed how it should proceed with its work, giving members an opportunity to make suggestions on whether meetings should be held virtually or continue face to face.

The majority of committee members recommended that the sittings continue at Gordon House. They commented on the importance of having the technocrats in attendance, noting the importance of body language in eliciting responses from the ministry staff.

In her annual report, Auditor General Pamela Monroe Ellis strongly reprimanded the Ministry of Labour and Social Security for its inertia in responding to worrying internal audit findings.

The auditor general reported that between April 2018 and June 2019, the internal auditor divulged that the ministry spent more than $99 million on capital goods, yet despite multiple internal and external audit reports, the responsible officers did not maintain accurate records to account for all assets acquired.

According to Monroe Ellis, management at the labour ministry failed to respond appropriately to these recurring issues, demonstrating scant regard for internal controls over fixed assets.

Over the eight-month period April to December 2017, payments totalling $50 million were made to five suppliers for security, janitorial and other services, but no valid contracts were seen.