‘Complete lockdown would have made sense’ 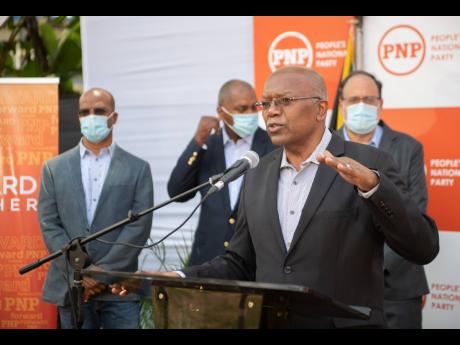 The health sector is in a worse situation than anyone can imagine, and three weekends of consecutive lockdowns will only make things worse, according to shadow minister on health, Dr Morais Guy.

The weekend lockdowns, aimed at curbing the spread of COVID-19, began March 26 and run until April 12.

However, Guy has described the on-again, off-again, on-again strategy as counterproductive, arguing that it will only prolong the hardships of the people.

“The number of COVID-19 cases will not decrease, we will not see any decrease in the numbers as a result of these measures in one-to-three weeks,” he explained during a March 24 press conference at the Office of the Opposition Leader in St Andrew. Guy said that from a public health perspective a complete lockdown would have made more sense, as the government’s measure is a little too late and will only prolong the agony for the population.

With COVID positive cases on the rise and topping 37,000, the country’s 5,100 hospital beds are under pressure with at least 15 per cent of them being occupied by patients with COVID or suspected of having COVID-19, and crowding out persons with non-communicable diseases and other illnesses, Guy charged.

Meanwhile, Opposition Leader Mark Golding lamented that rather than using his closing budget arguments to respond to the needs of the people, Finance Minister Nigel Clarke opted instead to waste time by reacting to issues raised by the People’s National Party.

“I just want to echo the point that the minister closed the debate without any adjustments to the budget. The budget does not address the severe hardships now visited on the people as a result of the sharpest economic decline in a year, in the history of Jamaica. The government has decided to tough it out and it is the people who are going to suffer as a result of the stance they have maintained.”

The opposition had called for some additional expenditure to stimulate the economy, as the best route to get the country out of the deep recession and to cushion the blow that the people are suffering now.

“The Government has ignored our position and the people cannot look to them for anything more that what they had originally offered. That was very disappointing and there is nothing really in this budget and especially the way it was concluded that would give anymore hope to the people, than they had at the onset of the budget.”