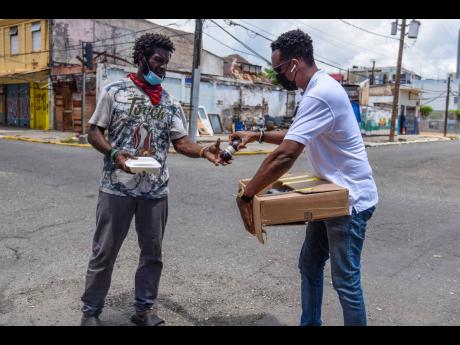 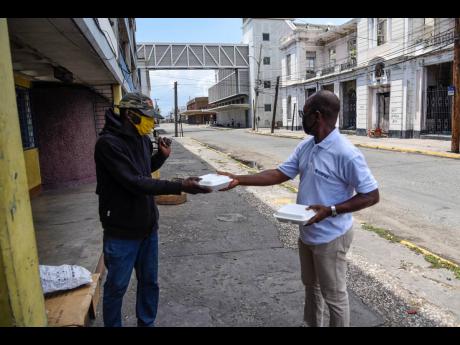 Nicholas Nunes/Photographer
Livingston Morrison (right), chairman of the board at WiPay, offers food to a homeless man on Church Street on Good Friday. The fintech company has urged other organisations to undertake charity for the homeless.
1
2

Among the scores of homeless persons who rushed in line on Church Street, downtown Kingston, on Good Friday to collect lunches was a woman who admitted that she had somewhere to call home but was desperately searching for food during the lockdown.

Janet*, who lives in a "little shelter" in the vicinity with nine other family members, said they all have to go out and beg for food.

She collected a meal issued by WiPay, a regional fintech company that has been operating in Jamaica for almost a year, which distributed around 80 lunches in the Corporate Area along with drinks sponsored by Lasco Distributors Limited.

Chairman of WiPay's board of directors, Livingstone Morrison, said that the company felt compelled to engage in the charity initiative as part of its corporate social responsibility.

“We are encouraging corporate Jamaica to do whatsoever you can to help fellow Jamaicans survive the pandemic and get ready for a better tomorrow,” Morrison said, explaining that he sympathised with the country’s leaders in managing the pandemic.

Janet told The Gleaner that it was the second meal she had received for the day, having had breakfast at the Marie Atkins Shelter on Church Street.

However, because dinner is not guaranteed in her household, she will be eating some of the lunch she collected and taking the rest home so “at least one or two somebody can eat out of it,” she said.

"Sometimes some of dem go other places like Cross Roads or so. So some a dem get food," Janet disclosed.

The 42-year-old said that resting in the dilapidated structure was no better than sleeping on the road, as they all took turns being on the lookout for trouble.

Security concerns have heightened since a string of overnight attacks in late January when four homeless men were killed in Kingston and two others injured uptown. One of the injured succumbed to his wounds.

On the night of Holy Thursday when all had dug into bun and cheese, Patrick Hope, a man who has been homeless downtown for 10 years, said he issued a stern warning to a man who persistently pestered women.

“Right now me nuh too sleep, because dem man yah daring,” he said, noting that he and other males have had to sleep with one eye open watching over the females at nights.

Fifty-one-year-old Ella Turner, who has been paralysed for 21 years, has been living on the streets for 13 years after fleeing her home in Rockfort because of violent robberies. She has been depending on Hope to assist her in and out of her wheelchair, especially when she needs to shower or use the toilet.

“One night one a dem young boy deh come with condom ... a try open up her leg dem,” Hope told The Gleaner. “Mi haffi run guh over deh and chop-chop up him bicycle mek him run.”

When he discovered that food was being issued on Church Street, he ran briskly from King Street and contended for lunches for Turner and another woman who is also unable to walk.

“Ladies are ladies. You have to treat the ladies like ladies to be treated, you know,” said the 55- year-old.

Hope echoed the cry of other homeless persons who lamented that this Good Friday has been one of the toughest in years and that they expected things to get worse throughout the long Easter weekend lockdown.

The lockdown lifts at 5 a.m. Saturday and resumes at noon until 5 a.m. Tuesday, April 6.