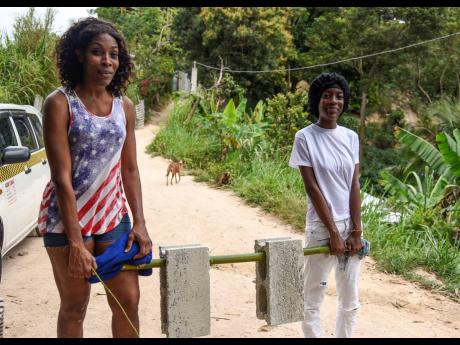 Nicholas Nunes/Photographer
Stacey-Lee Anderson and her daughter Shadel Paddyfoot use a length of bamboo to transport concrete blocks to create a foundation for her water tank in Bottom Goulbourne in Lawrence Tavern, St Andrew.

Undaunted by a winding journey up a hill along a rugged unpaved path in a little district in Lawrence Tavern, St Andrew, Stacey-Lee Anderson and her daughter used an unusual method to carry two building blocks at a time to their home a little distance away.

With a length of bamboo placed through the blocks, the mother and one of her three children held each end and made their way along a treacherous path to their destination.

Anderson had purchased the blocks to elevate a water tank to improve the flow.

But water is a scarce commodity for the residents of Bottom Goulbourne, Anderson told The Gleaner.

Another serious challenge for Anderson is sharing her cell phone with her six-year-old and three-year-old sons for online classes.

She said the six-year-old told her recently that he had become “tired” of the online engagement.

“He doesn’t learn quickly in this kind of environment. He is more accustomed to face-to-face,” she said.

Her daughter, who is in grade 10, is unable to join online classes at all times as Anderson is not able to supply her with the requisite data. She also has to use a phone to participate in virtual learning.

“It’s not easy. I don’t know how other parents get through it. I use my phone for both my sons, and my daughter uses her phone,” she said.

Anderson said constant focus on the phone daily is causing some amount of strain on their eyes.

As a single mother, Anderson said she was only able to cope through faith in God.