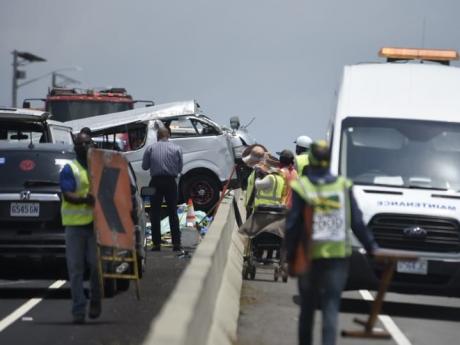 Some people were thrown from the mini bus, with many now laying on the roadway. The driver is among those unresponsive.

Four people have been confirmed dead and 11 injured in a major crash along the Vineyards leg of Highway 2000 in St Catherine in the vicinity of the Spanish Town exit.

The police say two of the deceased are men and two are women.

Their identities have not yet been determined.

Eyewitnesses reported that a mini bus with passengers crashed into a small truck laden with hardware materials.

The impact sent the truck crashing into a sign along the highway while the mini bus flipped before coming to a halt in the median.

JUST IN: Mini bus crashes on Highway 2000 in the vicinity of the Vineyards toll booth in St Catherine. Multiple injuries and possible deaths. Passersby have been rushing to assist the injured - Contributed video. pic.twitter.com/pyKyKfoYOa

Some people were thrown from the mini bus, with many now laying on the roadway.

The driver is among those unresponsive.

Emergency personnel rushed to the scene as passersby sought to assist.

"Me a drop down. Me never see so much bodies one place. I saw four bodies on one side, not sure if any more are on the other side," a woman told The Gleaner.