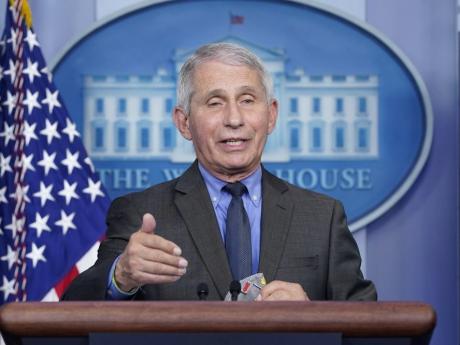 Dr. Anthony Fauci, director of the National Institute of Allergy and Infectious Diseases, speaks during a press briefing at the White House, Tuesday, April 13, 2021, in Washington. (AP Photo/Patrick Semansky)

WASHINGTON (AP) — Half of all adults in the U.S. have received at least one COVID-19 shot, the government announced Sunday, marking another milestone in the nation’s largest-ever vaccination campaign but leaving more work to do to convince skeptical Americans to roll up their sleeves.

Almost 130 million people 18 or older have received at least one dose of a vaccine, or 50.4% of the total adult population, the Centers for Disease Control and Prevention reported. Almost 84 million adults, or about 32.5% of the population, have been fully vaccinated.

The U.S. cleared the 50% mark just a day after the reported global death toll from the coronavirus topped a staggering 3 million, according to totals compiled by Johns Hopkins University, though the actual number is believed to be significantly higher.

The country’s vaccination rate, at 61.6 doses administered per 100 people, currently falls behind Israel, which leads among countries with at least 5 million people with a rate of 119.2. The U.S. also trails the United Arab Emirates, Chile and the United Kingdom, which is vaccinating at a rate of 62 doses per 100 people, according to Our World in Data, an online research site.

The vaccine campaign offered hope in places like Nashville, Tennessee, where the Music City Center bustled Sunday with vaccine seekers. High demand for appointment-only shots at the convention center has levelled off enough that walk-ins will be welcome starting this week.

The states with the highest vaccination rates have a history of voting Democratic and supporting President Joe Biden in the 2020 election: New Hampshire at the top, with 71.1%, followed by New Mexico, Connecticut, Massachusetts and Maine, CDC data show.

Overall, though, willingness to get vaccinated has risen, polling shows.

In January, 67% of adult Americans were willing to get vaccinated or had already received at least one shot. The figure has climbed to 75%, according to the latest AP-NORC poll.

Dr. Anthony Fauci, the nation’s top infectious disease expert, said the goal is to get community figures, from athletes to clergy, to encourage vaccinations, particularly as the seven-day national average of cases remains over 60,000 new infections per day.

“What we are doing is we’re trying to get, by a community core, trusted messages that anyone would feel comfortable with listening to, whether you’re a Republican, a Democrat, an independent or whomever you are, that you’re comfortable,” Fauci said Sunday on ABC’s “This Week.”