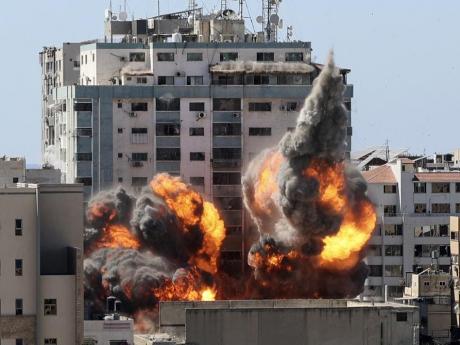 A ball of fire erupts from a building housing various international media, including The Associated Press, following an Israeli airstrike today in Gaza City. The attack came roughly an hour after the Israeli military ordered people to evacuate the building, which also housed Al-Jazeera and several offices and apartments. There was no immediate explanation for why the building was targeted (AP photo).

The Israeli military said Al-Hayes home served as part of what it said was the militant group's “terrorist infrastructure.” Al-Hayeh is a senior figure in the Hamas political leadership in Gaza, and the attack marked a further escalation, signalling that Israel is going after Hamas' top leadership, and not just military commanders. His fate after the strike was not immediately known.

Earlier, AP staffers and other tenants safely evacuated the building after the military telephoned a warning that the strike was imminent within an hour. Three heavy missiles struck the 12-story building, collapsing it in a giant cloud of dust.

For 15 years, the AP's top-floor office and roof terrace were a prime location for covering Israel's conflicts with Gaza's Hamas rulers, including wars in 2009 and 2014. The news agency's camera offered 24-hour live shots as militants' rockets arched toward Israel and Israeli air strikes hammered the city and its surrounding area this week.

“The world will know less about what is happening in Gaza, because of what happened today,” AP President and CEO Gary Pruitt said in a statement. “We are shocked and horrified that the Israeli military would target and destroy the building housing AP's bureau and other news organisations in Gaza.”

“This is an incredibly disturbing development. We narrowly avoided a terrible loss of life,” he said, adding that AP was seeking information from the Israeli government and was engaged with the US State Department to learn more.

The building that was targeted also housed the offices of Qatari-run Al-Jazeera TV, as well as residential apartments. The Israeli military said Hamas was operating inside it, a standard explanation, and it accused the militant group of using journalists as human shields. But it provided no evidence to back up the claims.

Uncertain why building was attacked

It also was not clear why the military took down an entire building filled with media offices and residential apartments. The military has carried out scores of pinpoint air strikes, including in the current round of fighting, that targeted single floors and even single apartments.

Hours earlier, another Israeli air raid on a densely populated refugee camp killed at least 10 Palestinians from an extended family, mostly children, the deadliest single strike of the current conflict.

The New York-based Committee to Protect Journalists demanded Israel “provide a detailed and documented justification” for the strike.

“This latest attack on a building long known by Israel to house international media raises the spectre that the Israel Defense Forces is deliberately targeting media facilities in order to disrupt coverage of the human suffering in Gaza,” the group's executive director, Joel Simon, said in a statement.

The latest outburst of violence started in Jerusalem and spread across the region over the past week, with Jewish-Arab clashes and rioting in mixed cities of Israel. There were also widespread Palestinian protests Friday in the occupied West Bank, where Israeli forces shot and killed 11 people.

The spiralling violence has raised fears of a new Palestinian “intifada,” or uprising, when peace talks have not taken place in years. Palestinians on Saturday were marking Nakba (Catastrophe) Day, when they commemorate the estimated 700,000 people who were expelled from or fled their homes in what was now Israel during the 1948 war surrounding its creation. That raised the possibility of even more unrest.