Jamaica 'best bet' for top 21 in Miss Universe this evening 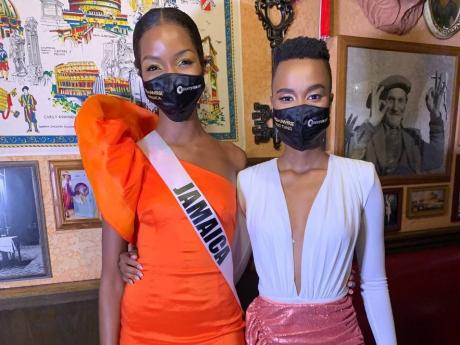 "I'll do my utmost best, to make [Jamaicans] proud.”

In every interview Miqueal-Symone Williams has done since the start of her Miss Universe 2020 journey, she has expressed that her goal is to make her country proud and already, she is poised to represent Jamaica well tonight at the 69th Miss Universe pageant.

Several pageant critics and online magazines have named the present Miss Universe Jamaica representative a standout and a shoo-in for the top 21 candidates.

“When the picture-perfect images match the woman walking on stage, that is fantastic. Miqueal's modelling translated well in both her swimsuit and evening gown performances. When Jamaica enters the semi-finals, they usually do very well. We'll find out soon enough if Miqueal will continue that,” said renowned pageant coach and commentator Voltaire Tayag on Rappler.com in his Miss Universe 2020: The Best Bets list.

Throughout all of the events, there have been back-to-back rehearsals said Karl Williams, the Miss Universe Jamaica Organisation's pageant director and franchise holder, who is presently in Florida to support Williams.

“We are seeing photos of some of the girls whose toes are bruised and ankles are swollen with the rigorous rehearsals and even after the preliminary competitions, they were in rehearsals again until 1:00 a.m., but had to be ready for another session by 6:00 a.m. on Saturday morning,” he said.

Williams added, “Miqueal did an amazing job with her performance at the preliminary competition and while the nerves are high, we are excited and more importantly, she is in good high spirits.”

The rehearsals take different formats, with the candidates practising to focus on the judges, then the coronation show is about the audience and cameras he explained. Then the live show will be aired at 7 p.m. on FYI and on the Miss Universe YouTube channel.

The pageant director shows no reservations about Miss Universe Jamaica's chances of making it into the top 21 and looks forward to hearing Williams' name called during tonight's show at the Seminole Hard Rock Hotel and Casino Hollywood.

“I believe she has laid it all out on the table for the judges and the various selection panellists to like her. Right now, we want Jamaicans to show their support as she is carrying the weight of the nation. A strong Diaspora cohort is here,” Williams said.

The last Miss Universe pageant was in December 2019 and its winner, South Africa's Zozibini Tunzi has made history by being the longest-reigning Miss Universe ever.

“This is not like the Olympics, where, if an athlete does not win, they probably can go back the following year…it's a one-shot thing. However, Miqueal is charged and ready to go for tonight's coronation,” Williams concluded.