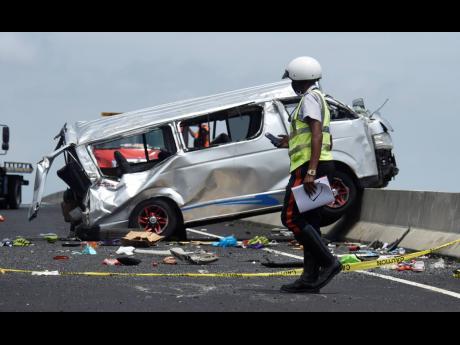 A policeman walks by the Toyota Hiace minibus that was involved in a crash on Highway 2000 on Monday, April 12. Five people were killed in the collision and 18 injured, including the driver, Dwayne Fowler, who has been charged in relation to the incident. He is out on bail and is to return to court on July 28 (Nicholas Nunes photo).

The 32 year-old driver of the ill-fated Toyota Hiace minibus, which crashed along the PJ Patterson Highway, killing five people and injuring 18 others, is return to court on July 28.

Dwayne Fowler was granted bail in the sum of $700,000 with surety when he appeared in the St Catherine Parish Court on Friday. He was granted bail on condition that he reports to the May Pen Police between the hours of 6:00 a.m. and 6:00 p.m., Monday to Friday.

It's alleged that on April 12 at approximately 11:07 a.m., Fowler was driving a 2012 Toyota Hiace minibus heading towards Kingston, on the PJ Patterson Highway in St Catherine.

While attempting to overtake a truck heading in the same direction, the left rear tyre of the minibus, reportedly, blew and Fowler lost control of the vehicle when. The minibus slammed into the back of the truck and then into the concrete median and flipped several times, throwing passengers from the vehicle.

Five people died and 18, including Fowler, were injured.

Fowler was subsequently charged with five counts of vehicular manslaughter.