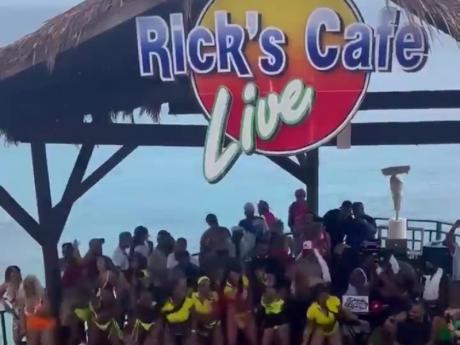 Rick's Cafe': "We deeply regret that it occurred, and sincerely apologize for allowing it to happen. Going forward, we will redouble compliance training to ensure this does not happen again."

Strategist in the tourism ministry, Delano Seiveright, says a "full investigation" has been launched into the party series as local promoters struggle to convince the Government to permit some entertainment events.

"We deeply regret that it occurred, and sincerely apologise for allowing it to happen. Going forward, we will redouble compliance training to ensure this does not happen again."

Rick's said that all people were temperature-checked, hand-sanitised, and that face masks were required for entry.

However, viral footage showed widespread disregard for social distancing.
Outrage intensified Thursday evening when it emerged that the seven-day Mocha Fest event, which started on May 24, was being advertised on the website of the Jamaica Tourist Board (JTB), the Government's tourism promotion agency.

"We are appalled! Full investigation," tweeted Seiveright, who is also a senior adviser to Tourism Minister Edmund Bartlett.

According to him, the JTB's calendar should have been updated "a long time ago".

"Quite regrettable!" Seiveright continued. "JTB gave NO undertaking for sponsorship &/or endorsement of such activities since the start of pandemic. We have supported virtual events so far...More details soon!"

The party's details have since been removed from the website.

"Mocha Fest Jamaica will be coming back bigger and better than ever in 2021 with a 7-day special edition event," the event's website said, speaking of up to eight parties across several resorts.

It's been a rolling battle between entertainment lobbyists and the Holness administration which has insisted that enough progress on containing the deadly coronavirus had not been made to facilitate even a partial reopening of the entertainment sector.

It's why when videos of the apparent first days of Mocha Fest emerged online Thursday, dozens of persons expressed shock that such an event was being permitted in defiance of protocols requiring mask wearing and social distancing.

"Honestly, 2say im UPSET is an UNDERSTATEMENT" tweeted @ValentinaJSS, echoing the sentiments of many online commenters.

She added: "Ppl are suffering bc of these nightly curfews; can barely pay bills & buy food. Small business sector suffering due 2 weekend curfew hours BUT #mochafest can keep!? Foreigners can come here & BREATHE WHILE WE SUFFOCATE!!!"

Event manager Ibrahim Konteh said he had no "issues" with Mocha Fest but with the Government's insistence that the local sector cannot be accommodated in the COVID-19 protocols.

"There's clearly a way for entertainment to happen in Jamaica for tourists but NOT LOCALS? We have to shut down our business for over a year and look to farin to survive but hotels can do this?? How? Why?@AndrewHolnessJM," he argued, mentioning the prime minister's Twitter handle.

Speaking in Parliament on April 13, Holness said although he recognised entertainment as a business and important for economic recovery, the restrictions were important because gatherings were "usually the ground zero of spreads".

"We understand the hurt and suffering. Many have lost significant resources," he said, noting that the Government would engage with stakeholders on how the State could support the industry.

In January, Dr Marcia Graham, the medical officer for Westmoreland, the parish where Mocha Fest was held, complained that tourism players there were breaching the COVID-19 protocols while residents were forced to comply.

The Government has maintained an islandwide weekday curfew that starts 8 p.m. daily. It's longer on weekends, and holidays have become 'no-movement' days.

Public gathering limit
Public gatherings are limited to 10 persons, with curtailments on events such as burials and weddings. Under the law, persons can be fined for breaching the protocols.

As the measures got tighter in recent months, there's been a downward trend in reported COVID-19 cases and hospitalisation although death figures have raised concerns.

A vital employer and foreign exchange earner for Jamaica, the authorities and players hammered out a so-called Resilient Corridor policy last year to allow the reopening of the sector under certain conditions.

Tourism earnings for the first pandemic year were approximately US$1.3 billion, 62 per cent less than the figure for 2019, Bartlett said in his April Sectoral Debate contribution in the House of Representatives.

But he said the outlook for 2021-2022 fiscal year which started on April 1 was "quite positive" and that the Government expects growth of 122 per cent on earnings and 236 per cent in visitor arrivals.

Tourism contributed more than 20 per cent of revenue to the country's GDP in 2018 and over 50 per cent in foreign exchange inflows. More than 300,000 persons are directly and indirectly employed in the sector.

Figures for Wednesday show 48,180 COVID-19 cases recorded in the island with 935 deaths.

The positivity rate, which was consistently above 20 per cent in the first three months of this year, has dropped to as low as 5.6 per cent.

More than 160,000 persons have been vaccinated against the disease.
The current COVID-19 protocols expire June 2.