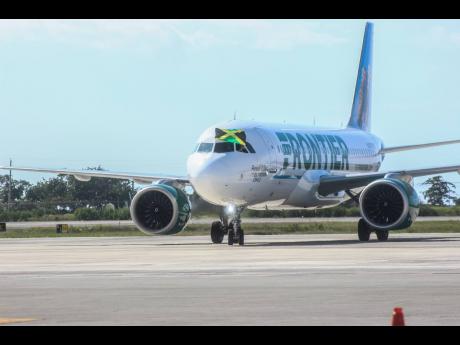 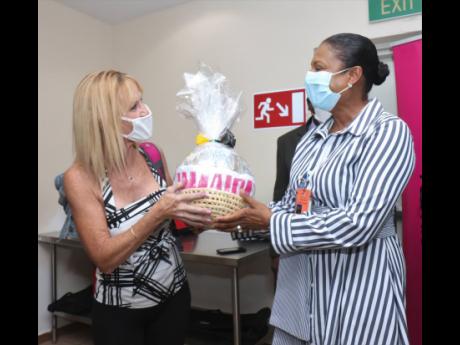 Ashley Anguin
Pamela White (left), a Frontier Airlines passenger, is welcomed to Jamaica by Odette Dyer, regional director of the Jamaica Tourist Board at the Sangsters International Airport in Montego Bay on Friday. 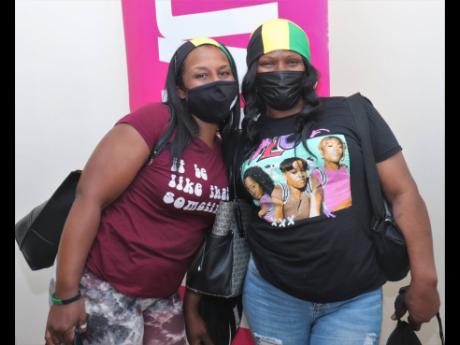 Jamaica’s newest entry into the Sangster International Airport, Frontier Airlines, is boasting that it has the lowest fares for Jamaicans wishing to visit families and friends to, or from Miami, Florida.

The airline, which flew its first Miami to Montego Bay flight into the tourism capital last Friday, is also touting access to a lucrative Jamaican community, whicsh it says is not only based in South Florida, but around the country.

Some 160 passengers were on the inaugural flight, while the carrier has booked three slots into Montego Bay weekly, departing Monday, Friday, and Saturday.

Fares vary between US$239 and US$329 per passenger return during the months of June and July, allowing its customers one free checked bag and one free carry-on, plus free seat selection.

Addressing the media at the airport on Friday, the airline’s sales manager, Alfredo Gonzalez, spoke of a difficult 2020, the height of the COVID-19 pandemic, for everyone in tourism. He suggested that Frontier decided on Jamaica after seeing an opportunity to connect families and friends back to the island.

“It was the right time and the right product. With what Jamaica has to offer of wide opened spaces, gorgeous beaches, beautiful resorts, amazing culture, Jamaica’s customers are looking for that,” he stated.

The aircraft, crew, and passengers were welcomed by Mayor of Montego Bay Leeroy Williams, regional director at the Jamaica Tourist Board (JTB), Odette Dyer, and other tourism officials.

Dyer in her message spoke of the pent-up demand for travel, arguing that it was the perfect time to introduce these new non-stop flights. “The flights will greatly increase the accessibility to Jamaica from our largest tourism market, the United States,” she stated.

The A320 Airbus arrived to a water cannon salute, decked on the inside with the iconic black, green and gold Jamaican flag in the cockpit area. The airbus has a carrying capacity of 186 passengers.

To expand the exposure that the new service will bring, the JTB invited seven travel advisors from the US who are currently experiencing the island through a curated itinerary.

The advisors will see first-hand the resilience of the destination, which will empower them to promote the island to their clients, said a JTB statement, which was bolstered by comment from Dyer that Jamaica’s tourism future was bright and the country looked forward to welcoming new and returning visitors year round.

The man behind the aircraft controls, Captain Tyler Petersen, who was making his first trip to Jamaica after 13 years of flying, said he was sad he had to turn around with the plane, but wants to return for the food.

“I have heard so much about the outstanding food, so I am sad that I can’t stay, but I will be back on my own time,” he promised.

International Frontier passengers can access any other US city via Miami. The airline flies into cities such as Cleveland, Denver and Philadelphia.