Andre Hall takes pride in being a girl dad 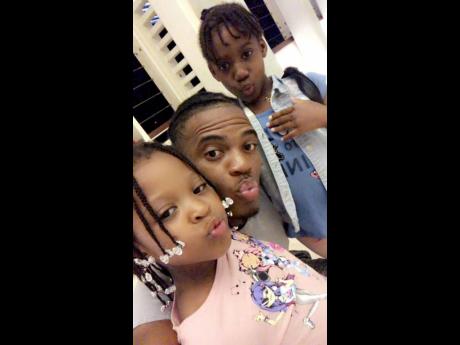 Contributed
Andre Hall and his daughters Annakiya and Genesis.

Resident of Effortville in Clarendon, Andre Hall was thrust with single-parenting duties when his elder child’s mother died when she was just two years old. Dealing with grief, he had to ‘step up to the plate', learning along the way as he tried to ensure his daughter Annakiya's needs were met.

Annakiya was living in St Ann at the time and Hall took her home after the funeral. Sharing with Family and Religion, he said it was like a whirlwind at the time.

“Everything happened so fast where I only had a month to get her in school for September. In that same year I got accepted at the University of Technology to study business management, but had to put it on hold to ensure my daughter got all she needed for her education. I was heartbroken to know that she will never see her mother again and how am I going to do this growing a daughter by myself. I was scared and nervous because I didn’t know what to expect but thanks to the help of my mother and sister, it wasn’t all bad in growing her in the way she should,” he reminisced on the experience.

Like every parent who makes the decision to go abroad for a while, he too had to make that choice as he looked to better provide for his daughters (he now has a four-year-old). It was a challenge leaving them to go overseas to work, especially given that Annakiya's mother had died and she would not have either biological parents around.

“I tried my best through video calling and ensuring I was ‘there’,” he shared.

Fathering, Hall shared, has taught him some lessons along the way, noting that giving up is not an option.

Being a ‘girls dad’, Hall says, it is a bit more challenging.

“Getting them dressed, getting their hair combed, which they think I actually can comb hair good (laughing) and also try to understand them as the opposite sex, talk to them and give advice concerning girly stuff that a female/mother can do more natural and easily,” Hall points out.

Hall, who was laid off from his job during the COVID-19 pandemic, said it is now a challenge providing for them financially with school and other basic needs of life.

He said after being laid off, he invested in a food truck from China which should have been delivered last year August.

With the business idea being to make smoothies and juices, he said the delay in the delivery of the truck saw him using up the money he had put aside for customs duties, to address his children’s needs.

“The longer it delayed, I had to be going in the money for my kids to survive. It reached Jamaica in January and the customs fees were huge. I tried to get help from all over and in the end I had to borrow, plus fortunately China assisted and the warehouse waived some of the fees,” Hall shared, even as he makes a plea for two commercial blenders and help to buy fruits so he can once again earn to properly take care of his girls.

Still, Hall gives credit to his youngest child Genesis’ mother who he co-parents with for standing in the gap.

“I am very passionate about my role as a father, I grew with my mother as a single parent therefore I promise myself my kids will never grow without a father as long as am alive. I’ll always be there and man up to all my responsibilities as a loving father,” was his solemn pledge.