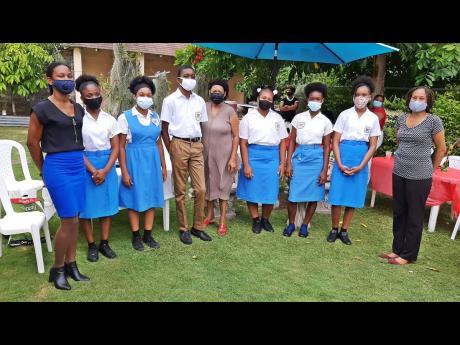 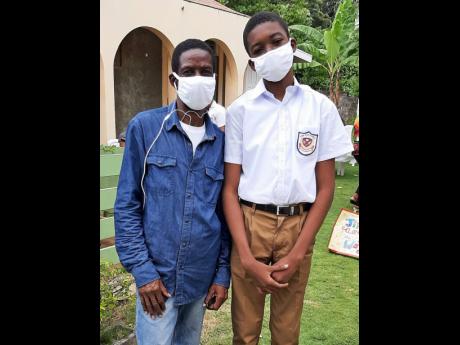 When retired Nurse Cheridah Wilson of Tower Isle, St Mary, initiated a scholarship in the name of her grandson, Amiri Raja Takemoto Hamilton, in 2017, it was set to run for five years.

Last Wednesday, the final edition was held at her home with six students of Iona High School being the beneficiaries. Wilson, however, left the door open for a continuation, if sponsors were to come on board. The scholarships are for children from single-parent families in St Mary and St Ann.

“There were six applicants, including five girls, all from Iona High School,” Wilson said. “The essays were beautifully written,” she said in praise of the student’s writing skills, used in a large way to help determine the beneficiaries.

The main scholarship recipient, David Williams, received $100,000 that will go directly to pay for his education, along with $15,000 for his personal use.

The other two winners, were Andrea Isaacs and Amelia Campbell, who also collected $100,000 each.

The runners-up, Celecia Blackwood, Akalia McLaren, and Sahai Dunn, received $40,000, with Sahai getting an extra $5,000, as she expressed her desire to become a nurse, a profession that Wilson spent decades in.

In addition to the cash awards, the students also got tablet computers and school supplies.

“I’m feeling great and I really appreciate what Miss Cher has done for my son over the past few years, and she’s still doing the great work that the Lord has given her to do,” Williams told The Gleaner.

“We really appreciate it, and she has done it for other students other than my son, so I just hope and pray that God will continue to keep her safe and sound, [so] that she will continue to bless others,” he added.

“It has been a really great help for my father because he’s a single parent and it’s really hard on him, and he has to be doing all these things to help me out,” his son said.

“She has been a great help for all of us and I feel really grateful,” David said.

Kareen Purcell-Bourke, guidance counsellor at Iona High, along with grade-10 supervisor Krystal Cohen, were at the presentation and spoke about the impact of the scholarships over the years.

“It is an absolute joy knowing that our students are benefiting from a neighbour,” Purcell-Bourke told The Gleaner.

She added: “She (Wilson) is a returning resident, a member of the United Church. Iona is a United Church school and it really is very heart-warming to know that she looks out for the welfare of Jamaican youth, and we do appreciate her.”

“So, I do believe that this will be a great help for them to get what they need to further their preparation, so that for next sitting of the CXC in 2022, they will be ready and at it to be at the top with the best of them,” Cohen said.