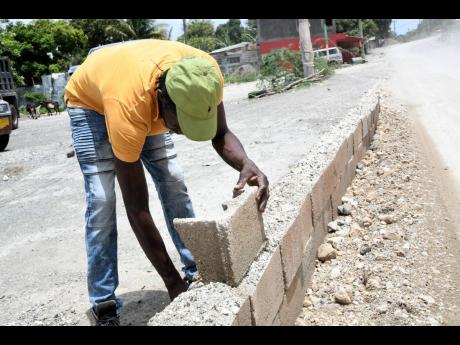 Rudolph Brown
Anthony Irving had to erect a makeshift wall to prevent his business place in Grants Pen, St Thomas from flooding from Tropical Storm Elsa. 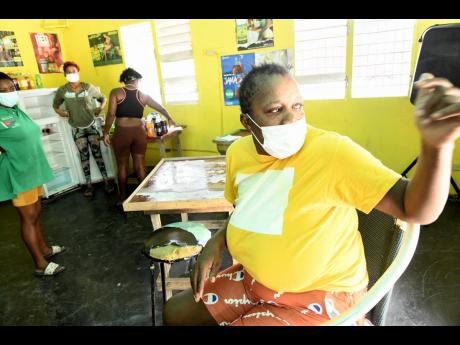 Though heavy rainfall is often referred to as showers of blessings, business owners in Grants Pen, St Thomas, may not quite agree.

Maybe years ago they would have welcomed the bursting of the clouds but since work on the Southern Coastal Highway Improvement Project began in their area, the people of the small community have grown fearful of the rainy season.

Their reason is simple. When it rains, it floods.

A day after Tropical Storm Elsa passed over the parish, co-owner of the Total Experience Bar in Grants Pen, Anthony Irving, could be seen shovelling silt from the front of his business place.

This was just part of the work, he said.

“The rain flood out in deh. Yesterday (Sunday) morning a in the rain mi affi build that to kinda block out some of the water,” Irving shared, referring to a concrete wall built yards away from the door of his bar.

He told The Gleaner that floodwaters had run from the road into his establishment, wetting its contents for the second time since the start of the road development in his area.

“Last time it run all the way through the bar and destroyed fridge and other things and through mi house wash out everything…something weh never used to happen before the construction. Right now mi can’t sleep when the rain a fall. It nuh mek sense because we nuh know what going to happen…if water going to go through the business place or house again,” he said.

Irving shared that around 4 o’clock Sunday morning, he and his wife Shelly-Ann were awaken by a rumbling sound, which later proved to be loose rocks from the hillside invading their space via floodwaters.

“Because dem dig off the hillside, so when the water come down it come down with mud and everything and that’s what creating the damage in the community. If we get extended rainfall, a problem,” Shelly-Ann stated, as she addressed minor damage done in the bar.

She said that the drain in the area needs to be constantly cleaned to prevent a disaster.

A neighbouring bar sported a veranda, boasting tables and chairs. This addition, according to owner Valerie Dixon, was a solution to flooding woes.

She, too, was a victim of unaddressed consequences of the ongoing roadworks.

“Last time we flood out, we lose everything…the water even went inside my kitchen and bathroom…so I tried to think about how we can stop it because a we have to help we self. Some people come take information last time and all now nothing,” said Dixon.

The woman who has been operating her business for over 15 years shared similar sentiments as her neighbours – they strongly believe the flooding was the fault of the highway contractors, China Harbour Engineering Company.

Businessman Irving noted, “They just building them road and nuh business with nobody down here. We not against the development but we need to be protected and they aren’t doing anything to protect us. China Harbour dig down the place and leave it gone do other things. They aren’t completing a part at a time and I feel like our voice is not being heard and we a get frustrated now.”

Despite the community’s reputation of mounting roadblocks to bring attention to their plight, Irving said he was hoping they won’t have to employ the old methods.

“Right now to how technology and life advanced, we nuh really want to have to resort to that. We would rather put it on pen and paper but if we have to go back to that style, we can do it, we know how to. We just trying to show that we have grown past that stage but it look like it going to reach to that,” he warned.