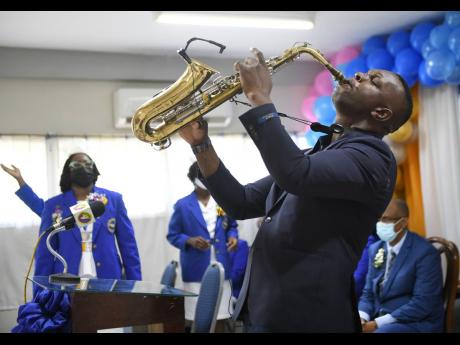 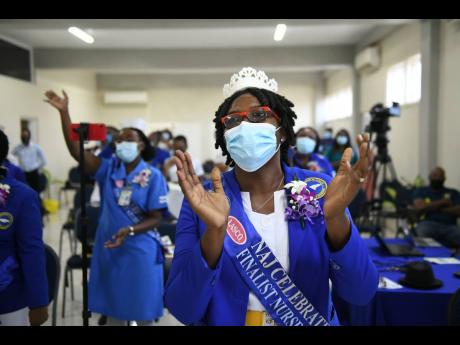 Smiles and gifts in abundance highlighted the Nurses Association of Jamaica’s 75th diamond jubilee celebration and awards ceremony at The Jamaica Pegasus hotel in Kingston on July 19. Nurses, student nurses and friends gathered to continue the weeklong celebration which followed a church service on Sunday, July 18. They were also there to witness the crowning of this year’s Nurse of the Year and Student Nurse of the Year, who will serve from 2021-2022.

“It’s not as easy as many people believe,” said Nurse of the Year Lilian Lewis-McDonald as she gave her response to winning the envied crown. Congratulating her fellow finalists, she said, “Today we are all champions, we are all winners.” She did not miss the opportunity to reflect on the start of the pandemic and how life has changed since. “This year was one of uncertainty,” she said, but noted that regardless of the changes in the world, she was glad that nurses were being recognised in such a fashion.

Working at the Victoria Jubilee Hospital, Lewis-McDonald said that nurses have learned to cope under stressful and demanding circumstances due to the pandemic, while devising strategies to ensure that patients receive the best care with limited resources.

Student Nurse of the Year Alicia Vickers feels like a “birthday girl” as she was flooded with gifts, trophies and cash prizes. She said she was excited and was really enjoying the moment. Originally from Spanish Town, and a student nurse at Brown’s Town Community College School of Nursing, she informed The Gleaner that in the absence of her late mother, who was an educator and her greatest supporter, she was initially sceptical about entering the competition. It was her sister, however, who “stepped up to the plate” and has been encouraging and supporting her since.

Nurse of the Year’s first runner-up, Claudine Douglas-Cole, from the Linstead Public Hospital, said, “It’s a good feeling to know that your hard work has paid off.” She told The Gleaner that it was important for Jamaicans and the health sector to acknowledge healthcare workers, “because it is one of the things that nurses complain about, that they don’t think the Government recognises their worth”. It is this perception, based on treatment, that pushes some to seek employment outside of Jamaica, because they feel they will be better appreciated abroad, said Douglas-Cole.

The competition has helped the 10 finalists to overcome some issues they had previously. Douglas-Cole confessed that the competition has challenged her weakness in public speaking, allowing her to control her nerves and be prepared to speak spontaneously.

Student Nurse of the Year’s second runner-up, Rochelle McKoy, shared the same sentiments as she said she had a “big fear of public speaking”. However, the competition had allowed her to overcome her initial fear, to landing her an award for winning the public speaking segment of the competition.

Vicker said that she has realised that since the COVID-19 outbreak, people have been recognising the quality of work that healthcare workers offer to Jamaica. She added that going forward, it is important for Jamaicans to support the health sector, especially nurses, as “we need the love, we need the support so we can continue to produce the quality work that we give in caring for our patients”.