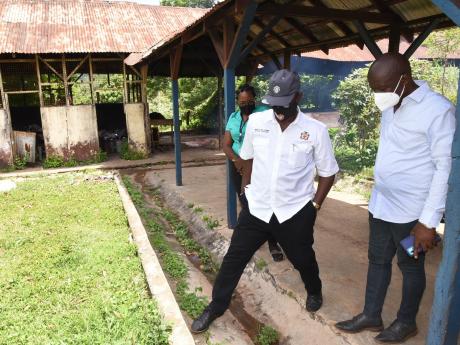 Local Government and Rural Development Minister Desmond McKenzie has indicated that the Ministry will be exploring ways to breathe new life into the Porus Market in Manchester.

The facility has experienced a decline in economic activity since the closure of the abattoir some years ago.

McKenzie, who stopped at the market during a tour of South Manchester communities on July 23, said he has asked the Social Development Commission to conduct a survey to see how best the facility can be utilised.

“We can't afford to spend money to fix it up and then nobody comes in, so we want to have some information that will guide the decision that will be taken as it relates to the future of the Porus Market,” he noted.

McKenzie, in the meantime, pledged to continue to work closely with the Manchester Municipal Corporation to “ensure that the social services that are required are provided”.

“As a matter of fact, I am going to advise [State] Minister, Homer Davis, to include this section of South Manchester as a part of the pilot project that we are going to be rolling out for the rural development buildout that I mentioned in Parliament earlier this year,” he indicated.

Some $650 million has been allocated to the Rural Development Programme, which is aimed at improving the lives and economic well-being of rural-area citizens, through the provision of services such as water, electricity, Internet access, roads, sidewalks, community parks, and indigent housing.

The programme will be piloted in Chambers Pen, Hanover.

Mayor of Mandeville, Donovan Mitchell, for his part, urged patience by the residents as measures are put in place to return activity to the Porus Market.

“This is not an overnight issue, so we ask that you continue to bear with us while we look at the best possible solution. We will have the community meetings, we will have stakeholder collaboration and then move on to see how best the community can be developed in a way that we all can benefit,” Mitchell said.