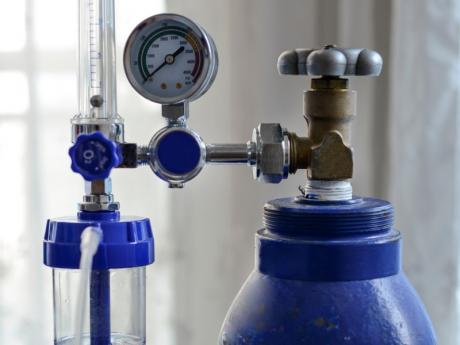 Health Minister, Dr Christopher Tufton in confirming the oxygen supply shortage said the situation has arisen due to high demand, but said the government is trying to manage the problem.

Jamaica's sole producer of medical oxygen, IGL has run low on the supply and has advised hospitals and medical practitioners to carefully use what is on hand until the situation can be remedied, hopefully by Monday.

This development coincides with a declaration by the Health Ministry that public hospitals will only be conducting emergency services as COVID cases exceed current capacity for isolation.

Health Minister, Dr Christopher Tufton in confirming the oxygen supply shortage said the situation has arisen due to high demand, but said the government is trying to manage the problem.

Yesterday, Jamaica recorded the highest number of hospitalisation of COVID patients with some 739 people in facilities islandwide.

Ninety-two were critically ill and 61 moderately ill, meaning they would among other things, require oxygenation.

At the May Pen Hospital, doctors were advised that IGL ran out of bulk oxygen at 10:30 pm Friday night and that “there is no more oxygen to get over the weekend.”

“We are likely to run out by later today if we don't pitch the oxygen,” the advisory read.

The doctors have also been told by their supervisor to be vigilant in turning off oxygen supply if the patients leave their bed or are eating.

Managing director of IGL, Peter Graham, could not be reached for a comment.

Meanwhile, Senior Medical Officer at the May Pen Hospital, Dr Bradley Edwards, said the institution is responding to the shortage.

“We have put in some strategies to utilise what we have now,” he said.

A saturation level of 92 per cent is now being used to determine patients who need oxygen.

“If someone needs oxygen and their oxygen level is at, say 94 per cent, we can start them at 92 per cent which is not much different,” he said.