‘This is a disgrace!’ 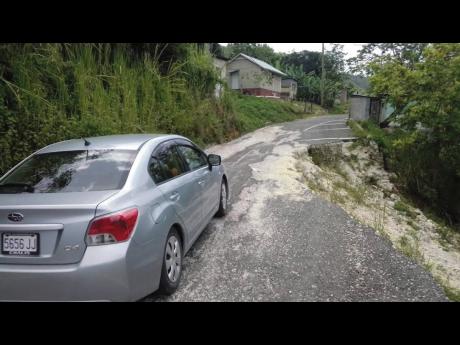 Contributed
A section of the roadway in Jointwood, St Elizabeth that residents claim is challenging to nagivate, especially at nights due to a massive breakaway that occurred last November.

Disgruntled residents of Jointwood, St Elizabeth, are venting anger at their Member of Parliament J.C. Hutchinson, who they say has turned a blind eye to their badly damaged main road, which has got worse since the recent passage of tropical storms Grace and Ida.

When The Gleaner visited the community on Monday, angry residents said that since a massive breakaway in November last year, which sparked a visit by Everald Warmington, minister without portfolio in the Ministery of Economic Growth and Job Creation, Hutchinson, and representatives from the National Works Agency, nothing of substance has been done.

According to them, the condition of the roadway is very challenging as, in addition to being all but impassable at nights, motorists regularly ran off the road, into a gorge below.

“This is a disgrace! It is a major roadway which leads from the parish of St James to St Elizabeth and other parishes, and yet the Government chooses to turn a blind eye to such a dangerous death trap,” said businessman Ackeem Gentles.

“The man dem just turn them back pon the community with the roadway split inna two. Several persons get seriously injured over the past weeks and wi haffe help carry them go a hospital,” said Gentles.

“As you can see for yourself, if motorists are not used to this section of the roadway, and do not know that dem have to travel inna single lane, dem end up over the gully, and might even lose dem life,” continued Gentles.

“It even becomes more deadly since the tropical storms, and as you know, this a de main roadway from south St James to St Elizabeth and Manchester. At nights, because the area is not properly lit, that is when it becomes serious and life-threatening.”

Howard Hendricks, the National Works Agency’s public relations officer for the region, confirmed that since the four breakaways, an estimate was done to determine the cost to restore the road.

“As a matter of fact, I am just driving from those sites, where I have done some new estimates because the old ones can no longer be used,” said Hendricks. “We at the National Works Agency can do so much, and as you know the Member of Parliament J.C. Hutchinson is the person who calls the shots, and makes things happen. All we can do at this time is just to wait for a confirmation after I submit the estimates.”

Earlier this year in a previous Gleaner visit to Jointwood, Hendricks said he was quite hopeful that the much-needed repairs would be done.

“We are aware of three large breakaways in Jointwood, and I don’t know if you are aware that during the last week of November, we took Minister Everald Warmington and the Member of Parliament J.C. Hutchinson on a tour of the area,” Hendricks said at the time.

“We were then told to provide estimates, and we submitted estimates, so we are actually only waiting to see if there are actually any funding right now to facilitate repairs,” Hendricks added. “I can tell you that the estimate was done, but now I cannot tell you a timeline or anything like that, but it was good that the minister came, because he came and saw it for himself, and all we can do at this time is wait.”

Attempts by The Gleaner to contact Hutchinson were futile, and according to the residents, their efforts to reach him have also yielded no result.