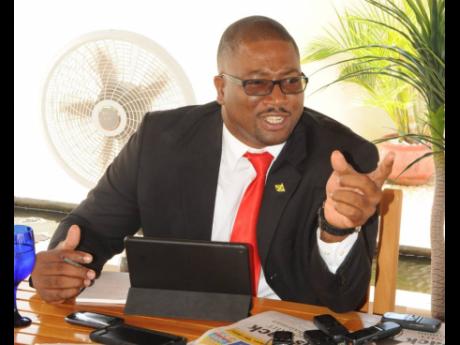 DEPUTY SUPERINTENDENT of Police (DSP) in charge of operations for the Westmoreland Police Division, Adrian Hamilton, is reporting that the involvement of children in the commission of serious crimes committed in the parish continues to be the symptom of a pervasive criminal culture, broken homes and prevalent gang activities.

“It has become a major concern, the frequency in which juveniles, mostly young men, are finding themselves at an alarming rate on the wrong side of the law,” the senior cop stated.

He added: “Up to September 18, records show that 106 children have been either a victim or a perpetrator of crime in the parish of Westmoreland. When broken down, the alarming figure shows that 25 of this amount have been perpetrators who contributed to crimes, while eight-one were victims of crimes committed in Westmoreland,” DSP Hamilton stated.

Hamilton also noted that investigations have revealed that a number of these teenage perpetrators are repeated offenders.

He noted that the police seized four illegal firearms, several rounds of ammunition, and arrest of six persons, including four teenage boys, during three operations carried out across the parish, over the weekend.

Reports are that about 8 p.m., on Friday, members of a joint team accosted a 16-year-old juvenile, and 23-year-old Welder Ackeem Garrick, along Hudson Street in Savanna-La-Mar, and carried out a search of their person. They were found in possession of a KelTec 9mm pistol with a magazine containing 10 9mm rounds. They were both taken into custody, where Garrick has since been charged with illegal possession of firearm and ammunition.

About 3 p.m. on Saturday, members of a police patrol accosted 21-year-old Garth Spence, unemployed, of Strathbogie, and another youth along Dalling Street, and a search was also carried on their person.

During the search, Spence, who is also on bail for murder, was found in possession of a 9mm pistol with a magazine containing one 9mm round. He was also taken into custody and charged for illegal possession of firearm and ammunition.

DSP Hamilton also attributed the successive seizures on the weekend to increased operational focus, with an emphasis on stop-and-search activities, especially in crime hotspots across the parish