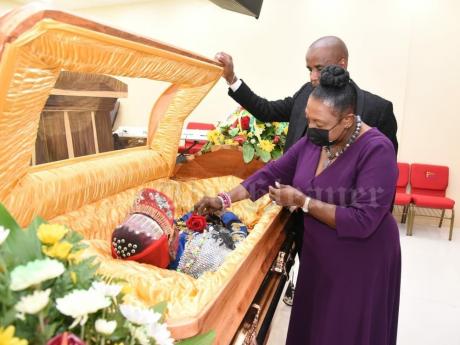 Jamaican reggae legend Lee 'Scratch' Perry was today remembered as an icon who blazed a trail for Jamaican music.

"It was my honour and my privilege to have worked closely with the family to make sure everything was in place and he was appropriately attired as we all know him," said Culture and Entertainment Minister Olivia Grange while speaking at a viewing of the late entertainer at the Perry's Funeral Chapel in Spanish Town, St Catherine.

"Any reflection on his work and his music, his innovation, his mixing of sounds, can only be concluded that he was a genius," said Grange.

She said that Scratch can be considered the Mozart of Jamaican contemporary music given his mastery of the fundamentals of his craft.

She said that it is regretful that music industry players could not gather to celebrate his life in a big way due to COVID-19 restrictions.

His Uppsetter label produced reggae songs like Small Axe and Duppy Conqueror by the Wailers.

He gained popularity in Europe and sections of the United States in the 1960s and 1970s and won a Grammy Award in 2003.

Scratch Perry died on August 28 at the Noel Holmes Hospital in Lucea, Hanover at age 85.

His body will be interred later today on private property in Cauldwell, Hanover.